Citation:
"Flying Officer Manser was captain and first pilot of a Manchester aircraft which took part in the mass raid on Cologne on the night of May 30th, 1942. As the aircraft was approaching its objective it was caught by searchlights and subjected to intense and accurate anti-aircraft fire. Flying Officer Manser held on his dangerous course and bombed the target successfully from a height of 7,000 feet. Then he set course for base. The Manchester had been damaged and was still under heavy fire. Flying Officer Manser took violent evasive action, turning and descending to under 1,000 feet. It was of no avail.
The searchlights and flak followed him until the outskirts of the city were passed. The aircraft was hit repeatedly and the rear gunner was wounded. The front cabin filled with smoke; the port engine was over-heating badly.
Pilot and crew could all have escaped safely by parachute. Nevertheless, Flying Officer Manser, disregarding the obvious hazards,
persisted in his attempt to save aircraft and crew from falling into enemy hands. He took the aircraft up to 2,000 feet. Then the port engine burst into flames. It was ten minutes before the fire was mastered, but then the engine went out of action for good, part of one wing was burnt, and the air-speed of the aircraft became dangerously low.
Despite all the efforts of pilot and crew, the Manchester began to lose height. At this critical moment, Flying Officer Manser once more disdained the alternative of parachuting to safety with his crew. Instead, with grim determination, he set a new course for the nearest base, accepting for himself the prospect of almost certain death in a firm
resolve to carry on to the end.
Soon, the aircraft became extremely difficult to handle and, when a crash was inevitable, Flying Officer Manser ordered the
crew to bale out. A sergeant handed him a parachute but he waved it away, telling the non-commissioned officer to jump at once as he could only hold the aircraft steady for a few seconds more. While the crew were descending to safety they saw the aircraft, still carrying their gallant captain, plunge to earth and burst into flames.
In pressing home his attack in the face of strong opposition, in striving, against heavy odds, to bring back his aircraft and crew and, finally, when in extreme peril, thinking only of the safety of his comrades, Flying
Officer Manser displayed determination and valour of the highest order."

In remembrance of his last flight a school near the former airfield was named after Flying Officer Manser.
Leslie Thomas Manser is buried at the Heverlee War Cemetery, Belgium. 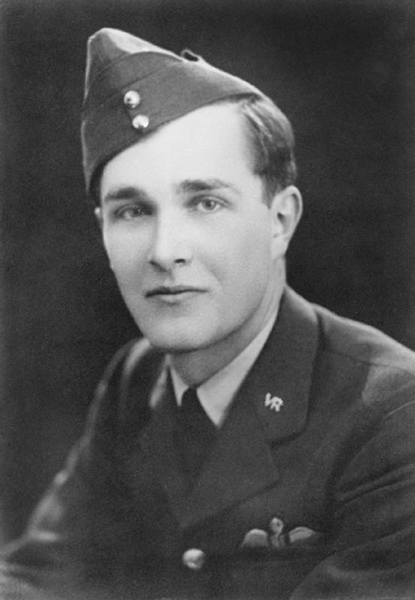