At the end of the Second World War, Alfred Müller managed to escape to the west at Frankfurt an dem Oder. Beceause of this he was not aware of his promotion to Oberst. According to the Stellenbesetzungsliste des OKW-PA, his promotion was dated on 15th May 1945 by General Wenck.
After the Second World War he went into the Bundeswehr on 1st February 1956. He retired on 31st March 1975 with the rank of Brigadegeneral. On 22nd February 1973 he received the Bundesverdienstkreuz 1st Class.

Awarded for his achievements as commander of the rearguard of the 19. Panzer-Division. In this capacity he did an excellent job of holding off the onrushing Soviets, often with his own executed counterattacks, which in turn allowed the friendly infantry to retreat. In the process his Sturmgeschütze and escorting infantry were repeatedly encircled, but each time managed to break out without assistance, even taking along other small pockets of German troops with them. On the 06.02.1943 a Soviet flanking thrust threatened the retreat route of the Division near Toschkowka. In response Müller mustered all available troops (messengers, clerks, cooks, etc.) and launched a counterattack along with his Sturmgeschütze that drove the enemy back. His Batterie destroyed 16 enemy tanks in the process.

On 04.12.1943 the formations of the V. Armeekorps, stationed on the Kersch peninsula, launched an attack aimed at crushing the Soviet bridgehead at Eltingen. The Romanian 6th Cavalry Division and elements of the 98. Infanterie-Division were only able to succeed in destroying the Soviet forces after a hard fight. Hauptmann Müller and his Sturmgeschütz-Abteilung had a decisive share in the success of this operation, and for distinguishing himself here Müller would be decorated with the Oakleaves to his Knights Cross. 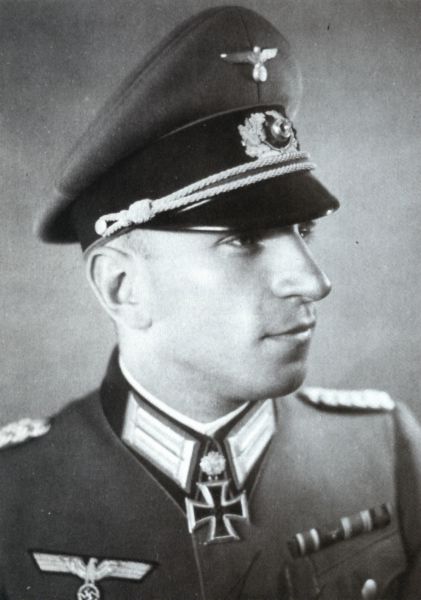