Wilhelm Albert did his military service from 1937 to 1939 in 14th (Panzerjäger) / IR (mot.) 86. He began the war as a non-commissioned officer in the 10th PD, Albert was deployed in Poland and later against France. In 1941 he moves with the 5th / IR (mot.) 86 against the Soviet Union and takes part in the battles there around Minsk, Berezina, Smolensk and Vyazma. He is wounded twice during these fights.
Later, he switched to Sturmgeschütz-Abteilung 1035, with which he experienced the defensive battles in the Bromberg area and Graudenz. There he struck back the enemy who had already broken through with 5 assault guns, whereby the 30 attacking tanks were shot down 7 and 7 were left unable to move.
For that he received as Company commander in the Panzerjäger division 35 on February 14, 1945 the Knight's Cross. Shortly before the award of the Knight 's Cross, Albert was severely wounded again, this time on both legs, causing him to suffer had to be amputated. He received the award in the hospital and because of his wounding
he was only released from the hospital on March 14, 1946. After the war he joined the Bundeswehr and retired as a lieutenant colonel.

Awarded for his actions during the defensive combat around Bromberg and Graudenz in early 1945. Here he and his 5 Sturmgeschützen managed to eject a Soviet contingent that had penetrated the German lines. In the process he and his men destroyed 7 tanks and immobilized another 7 out of a total force of 30 attacking tanks. 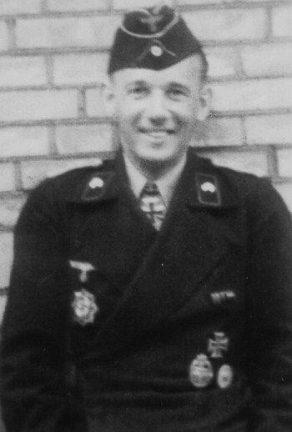