Alberts was the commander of an Infanterie-Regiment in the northern sector of the eastern front during the fighting near Newel in November 1943. On the 06.11.1943 the Soviets attacked the German 122. and 290. Infanterie-Divisionen with 11 rifle divisions and 3 tank brigades. The German defense held initially, but became strained under the unceasing attacks.

In this time Alberts Regiment fought southwest of Newel, and on the 13.11.1943 its frontline was penetrated on the right flank. In response Alberts pulled back his Grenadiers to a rearward blocking position on his own initiative and in a completely orderly fashion. This new defensive position held for 10 hours, after which friendly reserves arrived and stabilized the situation.

Alberts was approved for the Knights Cross for his leadership in this battle, but he was killed in action before he got a chance to receive it. 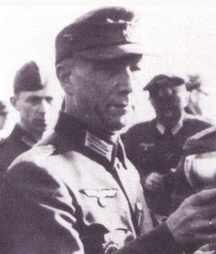