The unit was in this period serving in V. SS-Armeekorps, 2. Panzerarmee, Heeregruppe F.

SS-Hauptsturmführer and Bataillon commander Krombholz is the model of a true SS leader. His unbending will and fanatical belief in our great cause has been passed on to every last one of his troops, with the result that his Bataillon has been able to accomplish some seemingly impossible tasks in the last weeks and months.

On the 03.01.1945 the SS-Geb.Jg.Rgt. 14 launched an assault from the old frontline near Otok against Komletinci. Krombholz and his Bataillon (III./Geb.Jg.Rgt. 14) had the task of breaking through the enemy line, pushing past Komletinci and setting up a blocking position to the east of the village. In the shortest time he and his Bataillon were able to break through the enemy positions and were already 2.5 km southeast of Komletinci after just 1.5 hours of heavy fighting. Acting on his own initiative, he then immediately pushed on ahead of the Bataillon with a group of 3 Panzers and 20 mounted infantry, overrunning several enemy anti-tank gun positions, shattering the enemy, capturing the village of Nijemci and then holding it until the rest of his Bataillon caught up. He then formed a line along the river and held it against overwhelming attacks from the east, southeast and northeast.

His personal devotion to duty was clear to see here and he was himself the beacon of the incredible attacking spirit displayed. Through his independent decisions and actions he carried along his whole Bataillon with him. The enemy not only sustained heavy losses as a result, but also could not evacuate any heavy weapons from the area around Komletinci. The enemy lost 615 counted dead, 22 AT guns/7.62 cm cannons as well as large quantities of other war materiel. Furthermore his far advanced Bataillon permitted the occupation and construction of a new and better frontline east of Komletinci, from which the village of Nijemci could be held for 3 days against the most trying of attacks.

Particularly noteworthy among many other outstanding battlefield achievements was the breakthrough from Zvornik to Bijelina on the 20.12.1944. On the night of the 19-20.12.1944 and during the whole following day the enemy moved strong forces onto the west bank of the Drina in the Janja area (10 km south of Bijelina). At the same time the 28th Partisan Division advanced from the west to the east, trying by all means to prevent the retreat of our own forces.

From his position at Branjevo (21 km south of Bijelina), Krombholz received the order to make an emergency march with his Bataillon to a point 14 km west of the main road. From here they were to intercept and destroy the enemy in the Studenac area (7 km southwest of Janja) by attacking their rear. This objective was achieved to the full extent. About 1500 enemy men stood in the Studenac area ready to fight. Krombholz charged into the middle of the partisans at the head of his men, and a two hour battle was resolved in the Germans favour. The enemy lost several hundred dead as well as considerable quantities of weapons and equipment captured. The remaining partisans fled in disorder to the west.

With this crushing blow the movements of our own troops in the direction Bijelina - Brcko could proceed without any major difficulty, and they were able to establish contact with other friendly forces.

The unit was in this period serving in XXI. Armeekorps, E. Armee, Heeregruppe F. 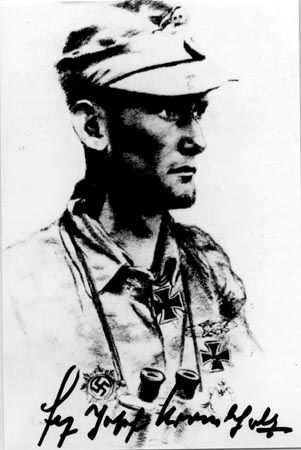