Meyer and his Panzer-Regiment fought through several echeloned enemy Pakfronts and artillery positions over the course of five days of uninterrupted armoured combat. After bitter house-to-house combat they took the villages of Chodaczkow & Wielki, and thereafter attacked further along the road in a northeasterly direction towards Tarnopol.

After he had captured a hill (one which was particularly bitterly defended by Bolshevik tanks and anti-tank guns) on his own initiative by attacking it from the rear, Meyer and his troops linked up with elements of the Tarnopol garrison that had broken out to the west. Their relief was only made possible by Meyers thrust.

In total Meyers Panzer-Regiment destroyed or captured the following during these days of battle:

This success was made possible thanks to Meyers unsparing devotion to duty and bravery.

To this was added a supplement by the II. SS-Panzer-Korps

The 9. SS-Pz.Div. was not attached to the Korps during the thrust to Tarnopol.

SS-Obersturmbannführer Meyer led an armoured group with 2 Grenadier-Bataillonen, 1 Panzer-Abteilung, 1 Panzer-Artillerie-Abteilung. and 1 Panzer-Pionier-Kompanie. Meyer particularly distinguished himself during the last two major combat days despite the unfavourable weather and road conditions. In this time all radio communication was impossible and he only relied on his own decisions. His personal bravery meant that at least a part of the Tarnopol garrison could escape to safety. The captured enemy materiel has been confirmed by messages from the commanders.

This recommendation is thereby endorsed.

After the American breakthrough in Brittany at Avranches, the enemy attacked with very strong and freshly brought up tank/infantry divisions against the boundary between Panzergruppe West and 7. Armee. On the 01.08.1944 they achieved a broad and deep breakthrough in the direction of Vire. The enemy thrust had the capture of Vire as its objective, an act which would cut off four defending Panzer, Fallschirmjäger and Infanterie-Divisionen located further to the west.

The Division, which was still located east of the Orne on the 01.08.1944, immediately dispatched an armoured Kampfgruppe under the command of SS-Obersturmbannführer Meyer on a march towards Vire. It was to intercept the broken-through enemy and seal off the penetration. Thanks to the info provided by his deployed recon units on the enemy movements, he was able to orient himself in a timely fashion towards the enemy thrust that was heading south and intercept it while it was still north of the VireConde road. Over the course of the next two days Kampfgruppe Meyer received additional armoured Kampfgruppen to add to its preexisting force.

With all these units combined, Meyer launched boldly led flank attacks against the enemy on his own initiative. These succeeded in pushing back the enemy to the north, as well as encircling and destroying strong elements of the broken-through enemy armoured units (including a Guards tank corps [?] plus infantry) after hard fighting.

It is exclusively to SS-Obersturmbannführer Meyers credit that the operational objectives of the enemy (the capture of Vire and the destruction of the German divisions located west of there) were thwarted. Throughout this time he was able to integrate and effectively wield his temporarily subordinated formations under the most difficult of conditions. So skillful was his leadership that not only was the enemy successfully held, but was also pushed back to the north while sustaining heavy losses.

Only a personality as strong as SS-Obersturmbannführer Meyers was capable of fulfilling this extremely difficult task. His fighting spirit, personal courage and high energy, coupled with his calm and deliberate decision-making, was decisive. Showing a ruthless devotion to duty, he succeeded in putting up his forces (far weaker in comparison to the enemy) against the vastly superior and fresh enemy units, which included some of their most elite combat formations. Through great tactical leadership of his own he was able to intercept, cut-off and largely destroy the enemy.

SS-Obersturmbannführer Meyer received the Knights Cross to the Iron Cross on the 04.06.1944 for his decisive successes during the relief of Fortress Tarnopol as commander of the armoured group of the 9. SS-Pz.Div. Hohenstaufen. Through his outstanding military accomplishments in the time period 01.-04.08.1944 as part of the defensive combat on the Invasion front, Meyer once again distinguished himself in such a way that he is now worthy to receive the award of the Oakleaves to the Knights Cross of the Iron Cross. Therefore I recommend that he be recognized with this high honour.

While personally leading his Regiment over the Seine river on the 29.08.1944, SS-Obersturmbannführer Meyer fell in battle. 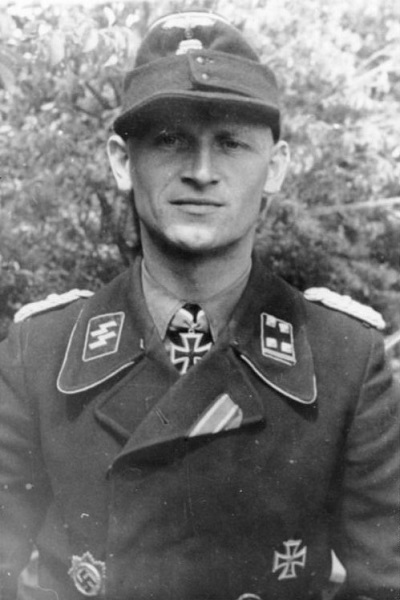