Schreibers Knights Cross recommendation reads as follows
I. Situation and battle reports:
1. At the end of June 1944 the Soviets launched a full scale attempt to cut off and destroy the XVIII.(Geb.)Armee-Korps in its positions on the Kiestinki front. The 6. SS-Gebirgs-Division Nord and its two Jäger regiments were in position on the north flank of the Kiestinki sector, established in dug-in positions. The enemy, who had begun to launch a thrust into the deep flank of the Division with two of their own, were opposed by a Kampfgruppe composed of soldiers of the Division as well as battalions from other divisions of the Korps. SS-Standartenführer Schreiber, commander of the SS-Gebirgs-Jäger-Regiment 12 Michael Gaissmair, was in command of this Kampfgruppe, which at times contained up to 7 battalions with troops from both the Heer and Waffen-SS.
Schreiber managed to overcome the technical difficulties stemming from the command and coordination of so many disparate units, and was able to achieve great success in both attack and defense. It is thanks to the resoluteness and dedication of SS-Standartenführer Schreiber that the enemy failed to achieve a strong breakthrough towards Jeletjosero-Ssennosero. SS-Standartenführer Schreiber distinguished himself through his personal bravery, always leading from the front in battles fought among dense forests. Despite the heavily weakened state of his units he was always able to inspire them to victory, defeating the enemy breakthrough attempts with counterattacks.
In the course of these defensive battles a separate Kampfgruppe, located in the village of Ssennosero, was encircled. The Gebirgs-Brigade 139 was tasked with the relief of this Kampfgruppe. During the attack to break open the encirclement ring, the brigade commander was wounded and fell out of action. SS-Standartenführer Schreiber was thus assigned the command of the Brigade. Despite the difficult situation, and the desperately fighting enemy who had almost completed the destruction of the encircled Kampfgruppe, the Brigade was able to achieve its objective. The Kampfgruppe was extracted successfully from its predicament and reinserted into the main line of battle, where it managed to stop all enemy attacks.
2. With the retreat of the Division from its positions on the Louchi-Front, SS-Standartenführer Schreiber took over the rearguard of the division starting from Kuusamo (Finland). Thanks to the maneuverability of these forces the retreat move to Rovaniemi was completed without any losses in men or materiel. From here, the Division was assigned to be the rear security of the entire XVIII.(Geb.)Armee-Korps during the movement through northern Finland towards the Norwegian border. On the 08.10.1944 a Finnish division was able to infiltrate around Rovaniemi and block the retreat road of the rearguard troops still under the command of Schreiber. In an energetic attack Schreiber and his troops were able to smash through the Finns while inflicting heavy losses, resulting in the pursuing Finnish forces to follow only hesitantly afterwards.
3. In order to ensure the safe transport of the supplies stored in Muonio, the Division received orders to create a defensive position south of the town and hold their ground until the evacuation was complete. The Finns, who were pursuing with 2 divisions along the TornioMuonio und RovaniemiMuonio roads, saw an opportunity to inflict some damage on the Germans. On the 29.10.1944 the Finns managed to take advantage of the difficult terrain to infiltrate in-between the units of SS-Standartenführer Schreiber to block the road again. When Schreiber recognized the situation, he swiftly used his attached artillery and Flak to begin direct fire on the attacking Finns, while attacking from the south with a reinforced battalion. In a 3-hour night fight, Schreiber managed to eject the attacking Finns and clear the road for passage. The Finns suffered quite heavy losses against minor casualties to Schreibers troops. In recognition of this success SS-Standartenführer Schreiber received a personal letter from the commanding general of the XVIII. Armee-Korps congratulating him on his victory.

II. Conclusion and justification for the Knight's Cross recommendation.
1. SS-Standartenführer Schreiber was instrumental in the success of the Division during the June-July battles of 1944 in defeating the Soviet attempt at encirclement, which saw one enemy division defeated and another heavily weakened. Had their attack succeeded it would have resulted in the collapse of the Kiestinki front. Due to the vast distances and difficult terrain, communications in these battles were nie to impossible. In these circumstances Schreiber was forced to make a number of independent decisions without outside help, and so proved himself as a most capable leader given the difficult situation.
2. The breakthrough of the rearguard against the Finnish blocking position 8 km north of Rovaniemi can be attributed to the quick decision-making and bravery of SS-Standartenführer Schreiber. By his actions much valuable equipment of the rearguard (artillery, vehicles, etc.) could be retained.
3. During the fighting south of Muonio Schreiber mastered the situation through his immediate assessment of the situation and attack on the Finnish blocking position. Failure to do so would have seriously endangered the further withdrawal movements of the division. During the enemy attack on his own regimental command post he showed the highest personal bravery.
SS-Standartenführer Schreiber, who was awarded the German Cross in Gold in January 1942, has shown himself to be a masterful company, battalion and regimental commander in all theatres of the war.
Through his determination, bravery and perseverance in difficult situations, Schreiber played a significant role in the successful withdrawal of the division from northern Finland without any major losses. 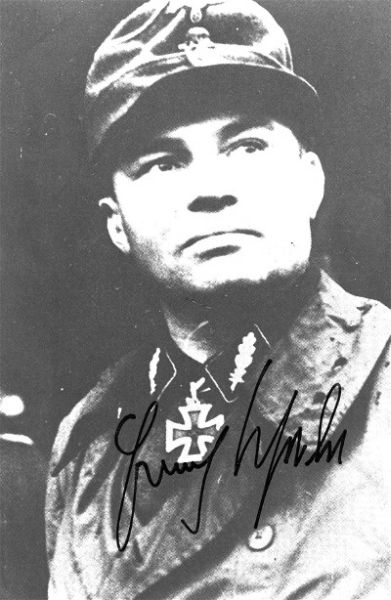