On the 06.08.1944 the Kampfgruppe 19. Waffen-Grenadier-Division der SS (Lett. Nr. 2) was engaged in combat behind the Aiviekste river (west of Lake Lubana), however it did not have friendly contact to either the left or right as a result of deep hostile penetrations. During the afternoon an attack by a Soviet Division from the north threatened to sever the single retirement road of the Division at a point northwest of Lubana. High command ordered that this penetration be sealed off.

In this precarious situation SS-Brigadeführer Streckenbach made the decision to go over to the attack. He assembled all available reserves (including every last supply driver and clerk he could find) and then personally led a pincer maneuver against the broken-in hostile elements.

Success: Total destruction of 2 Soviet rifle regiments, Division was able to pull back as ordered along the sole available route.

SS-Brigadeführer had been the soul of resistance for his Division since the beginning of its prolonged withdrawal on the 10.07.1944. Throughout this time he rushed from Kompanie to Kompanie in the foremost line, all while rallying wavering units and upholding the combat morale of his Latvian formations. The countermeasures that he executed during this period repeatedly led to notable successes.

His proven personal bravery and leadership qualities make him a particularly worthy candidate for being awarded the Knights Cross to the Iron Cross.

During the morning hours of the 23.12.1944 the Russians conducted a short yet ferocious artillery barrage before launching a surprise multi-division assault against the left neighbouring Division (Gruppe Henze) as well as the left wing of the 19. Waffen-Grenadier-Division. Although the Division was able to repulse all attacks against it, the enemy was able to achieve a deep penetration in the sector of the left neighbouring Division. Within a short time the foe had overrun the second position, and then they pressed on to the Artilleries defensive screen. Enemy forces pivoted to the northwest, and by pushing on in this direction they threatened to cut off the left wing of the Division. This could easily have led to the disintegration of the frontline: the enemy would have achieved their deep penetration and thereby enabled their planned breakthrough to proceed.

In this particularly critical moment SS-Gruppenführer Streckenbach decided to first order his Waffen-Gren.Rgt. 42 to form a blocking front. At the same time he planned to commit all available forces against the enemys main thrust in the left flank of his Division. These included the II./W.-Gren.Rgt. 43, the existing alarm units from the supply troops and the Kampfschule of the Feld-Ers.Btl. Although his right flank was also being attacked at several points he nonetheless pull additional elements from it in order to reinforce his left wing. This risky decision paid off however, as it held up the deep flank of his Division and ensured that the hostile thrust towards the northwest would be temporarily contained.

However the enemy pressure against the deep flank of the 19. Waffen-Grenadier-Division der SS continued to increase throughout the 24.12.1944, and so during the afternoon the divisional commander was assigned the II./Gren.Rgt. 273 of the 93. Infanterie-Division (which had been brought up via motor transport). On the morning of the next day he did not use it to seal off the new hostile penetrations, but rather he used it to deliberately counterattack the flank of this enemy thrust.

This countermeasure again halted the enemys thrust to the northwest for the time being, and it also helped buttress the ever-lengthening deep flank of the Division.

This initiative by the divisional commander was the deciding factor that enabled the extended frontline of the 19. Waffen-Gren.Div. der SS to be held for 4 days long despite strong enemy attacks in the front and flank. Such an action furthermore presented the enemy with a dangerous flank threat for their own thrust to the northwest. It was only on the night of the 26./27.12.1944 that the frontline of the 19. Waffen-Gren. Division der SS was pulled back to the Artillerie defensive position due to the situation in the sector of Gruppe Henze.

The Korps ability to delay this breakthrough attempt by 6 divisions and 1 Soviet Tank Corps with its own weak forces bought enough time for armoured reinforcements to arrive from other sectors of the Courland front, and once they had arrived it was possible to transition to a more active form of combat.

This outstanding achievement by the 19. Waffen-Gren.Div. der SS (which was notable enough to merit a mention in the Wehrmachtbericht) is largely attributable to the clear and energetic leadership of its commander. He personally directed the heavy forest combat of his Latvians from the vicinity of the regimental command posts, and everywhere he was the soul of the bitter resistance. Captured Russian officers stated that these combat days were some of the worst they had seen in the entire war.

Up until now this Latvian Division has held its ground in an exemplary fashion whilst engaged in defensive combat. It shows clear evidence of having been influenced by the personality of its commander.

The high combat value of his unit can be credited to the decisiveness, energetic leadership and personal devotion to duty displayed by the divisional commander, SS-Gruppenführer Streckenbach.

In these 9 major days of combat the Russians suffered heavy losses in men at the hands of the 19. Waffen-Gren.Div. der SS. They also sustained the following materiel losses to the Division in this time:

104 prisoners were also captured (including 4 deserters).

In these days of bitter forest combat along a wide front, the Division inflicted such heavy losses on 3 attacking Russian divisions that the enemy was forced to call off their assault on the 01.01.1945.

The defensive resolve of this Division laid the groundwork for the crushing defeat sustained by the Russian 22nd Army during the first days of January. 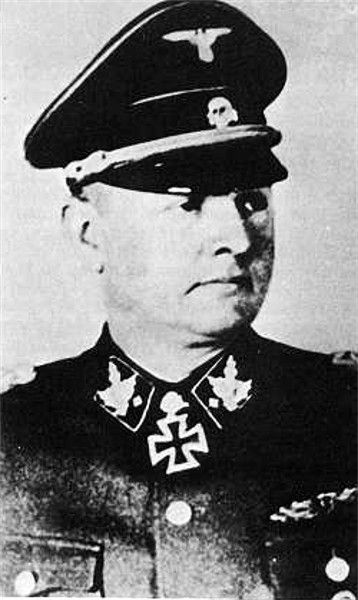