"During the attack on the 5.7.1943 the II./SS-Pz.Gren.Rgt. "Deutschland" had the order to break open the deep fortified enemy lines near Beresoff. After they had annihilated the enemy combat outposts, they were to take the village itself, then storm the heavily defended high ground to the NE behind Beresoff and take possession of it.

To support this attack of the Battalion a Tiger-Kompanie was attached, as well as a Pioneer-Zug of the 16./SS-Pz.Gren.Rgt. "Deutschland" under the leadership of SS-Hauptscharführer Weber. After elimination of the combat outpost, the Pioneerstosstrupp got the order to penetrate the tank-ditch before Beresoff together with the 6./SS-Pz.Gren.Rgt. "Deutschland", and then to knock-out the bunkers lying behind (which where in controlling positions).

After they penetrated into the tank-ditch they came under enemy fire. Out of camouflaged positions came the II./SS-Pz.Gren.Rgt. "Deutschland", who then gained a foothold in this tank-ditch. Further movement was prevented through well-aimed and non-stop enemy artillery, mortar and sniper fire. A further attack appeared impossible and high bloody losses began to mount; mine damage was also caused to the supporting Tiger-Kompanie, who as a result could not give further support.

Within this Battalion, to which the enemy artillery fire was causing higher losses hour after hour (shown through our dead and wounded), the leader of the Pioneerstosstrupp, SS-Hauptscharführer Weber, took the bold decision to take full control of the tank-ditch. Without Tiger support he alone took his Zug and stormed towards the bunker line in order to provide relief for the II./SS-Pz.Gren.Rgt. "Deutschland". In the strongest enemy fire, he explored any attack possibility. He took his Zug through the running trenches and moved through the violent enemy barrage. Moving through this tank-ditch his men threw the enemy out of one position after another and reached the Soviet bunker system that controlled it.

They exploited this success further and Weber stormed on with his Pioneers. Avoiding the enemy in Beresoff, he quickly took the calm decision to move through the village and onto the controlling high ground. In bitter close combat with his group, they attacked the bunker field there (around 15 bunkers) and forced the Soviets out of each position. This also forced the enemy to abandon the north and southern parts of Beresoff, who retreated in a wild flight over the high ground and moved northwards. Through this it was possible for the II./SS-Pz.Gren.Rgt. "Deutschland" to begin their advance out of the tank-ditch and push the enemy northwards, also gaining access to the main road to Kursk.

Through the go-getting advance, outstanding courage and superior leadership of SS-Hauptscharführer Weber (his attack group had only six casualties), as well the bold decision done on his own initiative, his Pioneerstosstrupp made the attack possible. They had a decisive share of the 20km breakthrough by the SS-Pz.Gren. Div "Das Reich" of the fortified Soviet field positions on both sides of Beresoff." 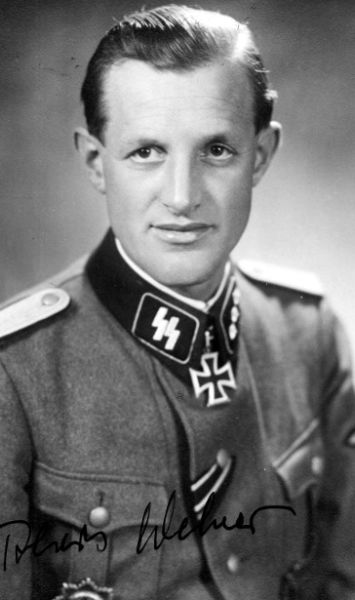