Citation:
"For great gallantry, skill and devotion to duty as gunlayer of the pom-pom in a motor gun boat in the St. Nazaire raid. Completely exposed, and under heavy fire he engaged positions ashore with cool and steady accuracy. On the way. out of the harbour he kept up the same vigorous and accurate fire against the attacking ships, until he was killed at his gun.

This Victoria Cross is awarded in recognition not onty of the gallantry and devotion to duty of Able Seaman Savage, but also of the valour shown by many others, unnamed, in Motor Launches, Motor Gun Boats and Motor Torpedo Boats, who gallantly carried out their duty in entirely exposed positions against Enemy fire at very close range." 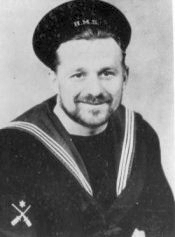