Quentin George Murray Smythe, was born in Nottingham Road, Natal, South Africa on August 6th, 1916 as son of Edric Smythe. He was the grandson of the First Administrator of Natal, Charles Smyhte. Quentin Smythe attended the Estcourt High School in Estcourt. After his education he started farming in Richmond.

During the Second World War he served from April 2nd, 1940 as Sergeant with the Royal Natal Carabineers, 1st South African Infantry Division, South African Forces. On July 17th, 1940 he sailed for Kenya on board the s.s. Devonshire. He was first send to the eastern Africa Campaign to act against the Italian Forces. When the German Army joined the fightings in Africa, he and his unit were replaced to the Western Desert Area.

After the Second World War he stayed in the Army and finally held the occupation of Officer Instructor with the Department of Defence, South Africa from 1970 until 1981. He finally reached the rank of Captain in the South African Forces.
In 1945 he married with Dale Griffiths. The couple had three sons and one daughter. The marriadge lasted until 1970. He then married a second time to Margareth Joan Shatwell. Margareth died in 1980. In 1984 he married a third time to Patricia Stamper.
After his retirement from the Army he once again returned to his farming career.
On October 22nd, 1997 he died of cancer in the Durban's Parkland Hospital.

Citation:
"For conspicuous gallantry in action in the Alem Hamza area on the 5th June, 1942.
During the attack on an enemy strong point in which his officer was severely wounded; Sergeant Smythe took command of the platoon although suffering from a shrapnel wound in the forehead. The strong point having been overrun, our troops came under enfilade fire from an enemy machine-gun nest. Realising the threat to his position, Sergeant Smythe himself stalked and destroyed the nest with hand grenades, capturing, the crew. Though weak from loss of blood, he continued to lead the advance, and on encountering an anti-tank gun position again attacked it single-handed and captured the crew. He was directly responsible for killing several of the enemy, shooting some and bayonetting another as they withdrew.
After consolidation he received orders for a withdrawal, which he successfully executed, defeating skilfully an enemy attempt at encirclement.
Throughout the engagement Sergeant Smythe displayed remarkable disregard for danger, and his leadership and courage were an inspiration to his men." 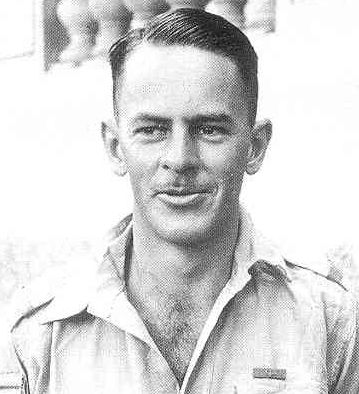