Georg-Wilhelm Postel was born in Zittau on April 25th, 1896.

On August 30th, 1944 he became POW to the Soviets upon the capitulation of Rumania. After his imprisonment he stayed in the Prison Camps Nr. 160, 74, 48 and 149 and in the hospital of Prison Camp Nr. 5351. He war interred in Prison Nr. 1 at Kharkov in 1949, where he was convicted to 25 years forced labour on June 4th, 1949. Potel died of Tubeculoses in the hospital of Prison Camp at Schachty on September 20th, 1953. There he was buried at the camps cemetery in Row 3, Grave 14. As far as is known, his remains were not transferred to any German war cemetery.

On the 04.02.1942 Oberst Postel was assigned command of all German units located around the Soviet penetration zone south of Wosszino. The next day Postel and his troops launched an attack that managed to close the gap created in the frontline by this penetration. Oberst Postel would be awarded the Knights Cross for this and other actions around Rzhev in early 1942.

Mentioning:
"An Infantry Division composed of withdrawn forward strong points under the exemplary leadership of its divisional commander Generalmajor Postel penetrated the strong enemy forces, destroyed them and returned to their own lines in a nine days lasting battle."

Every Kilometer Bitterly Defended - The Battlefield Feats of Generalmajor Postel:

Generalmajor Postel acted to pass on his unbreakable determination to the men of his Division ever since it became caught up in the extremely trying combat between the Don and Donez rivers in mid-January. Over the course of weeks of bitter fighting (and often without friendly contact to either the left or right) his men bloodily repulsed the assaults of overwhelming enemy forces and fought hard for every kilometre of ground. Eventually the unit pulled back from its forward strongpoints as per orders and proceeded to fight a 9-day breakthrough battle to occupy new friendly positions. In the process the men of the Division eliminated several strong Bolshevik battlegroups.

During all this fighting Generalmajor Postel served as his soldiers commander and lead combatant. He always placed himself where the fighting was fiercest and thereby inspired his men to give their best. Consequently he became badly wounded while conducting reconnaissance in the foremost line.

A particularly noteworthy incident in this time took place on the 10.02.1943, when Postel and his Division destroyed a reinforced Soviet rifle regiment. The Division finally reached German lines on the 13.02.1943.
215th Award.

Mentioning:
"The Silesian 320th Infantry Division, under the leadership of Generalleutnant Postel, exceptionally distinguished itself in combat in the southern sector of the eastern front."

Awarded for the outstanding leadership of his Division during the summer of 1943 near Belgorod, in the fall of 1943 around Kharkov, and in the winter of 1943/44 near Krementschug.
57th Award.

Mentioning:
"The 30th Army Corps under the leadership of Generalleutnant Postel together with the 306th Infantry Division, 15th Infantry Division and 13th Panzer Division fought heroically in sacrificial battles against superior forces in the southern sector of the eastern front." 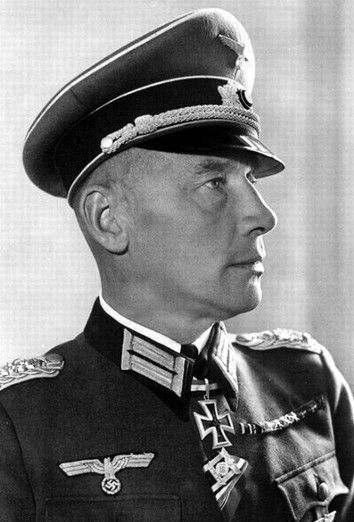