During the Second World War, Engelbert Bockhoff finally reached the rank of Oberstleutnant.

After the war he served with the Bundeswehr from 1st April 1956 until 30th September 1969 and there also finally reached the rank of Oberstleutnant.

Hauptmann Engelbert Bockhoff took over command of a Panzer-Aufklärungs-Abteilung from the German Danube region in August 1943. On the 14.10.1943 he and his men were in action south of Dnepropetrovsk, where they were involved in a counterattack that was being conducted by the Divisions armoured group. After its successful execution the unit was pulled out of the frontline.

On the next morning he [Bockhoff] heard new battle noises whilst positioned in his assembly area. The enemy had once again achieved a penetration at the same location as previously. Hauptmann Bockhoff did not wait for orders, and immediately ordered his Abteilung to commence a counterthrust. While this attack was in progress, he noticed that strong Soviet forces had also penetrated the frontline further to the left of his position. These new enemy troops threatened to roll up the entire Divisions frontline. Reserves were not available at this position at the time; the only troops in a position to help were those of Hauptmann Bockhoff.

Thus, during the middle of the ongoing counterattack by his own Abteilung, he pulled out 2 Panzers and 4 SPWs from the ranks of his unit. With this weak Kampfgruppe behind him, he personally charged against the enemy. The Bolsheviks were totally surprised. Several of their heavy anti-tank guns were knocked out before they even got off a shot, and a T-34 tank was destroyed. The remaining Soviet tanks were unable to resist the power of this bold flanking thrust, and they abandoned their own infantry forces (about 600 men) in response. Hauptmann Bockhoff then began a rampage amongst the Soviet infantrymen, which soon fled back across the frontline whilst leaving behind over 100 dead troops.

The Panzer-Aufklärungs-Abteilung of Hauptmann Bockhoff captured 412 prisoners in this fighting. 1 tank, 4 guns and 15 anti-tank guns were also destroyed or captured. The enemy lost at least 500 dead in this battle. Hauptmann Bockhoffs bravery and determination here had thus prevented an imminent breakthrough in this battle sector, and for this he was awarded the Knights Cross to the Iron Cross. 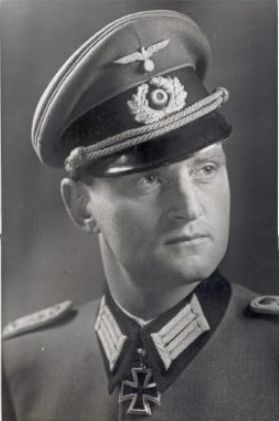