Hinrich Ahrens was born in Eickedorf, Grasberg, Osterholz, Niedersachsen on 21st March 1921. After attending Volksschule, he was educated for working in a mill between 1936 and 1939, until he was drafted into the RAD (Reichs
Arbeits Dienst) on 19th August 1940. After this he worked in France with the
Arbeitseinsatz. On 6th February 1941 he went into military service with 5. / Panzerjäger-Ersatz-Abteilung 20 at Hamburg.

After further recovery time at Kriegslazarett 912 bzw. Reserve-Lazarett
Oschatz, he was finally assigned to Ausbildungs-Kompanie 22 at Oldenburg
until the end of the war. At that time he became a Prisoner of War with the
Belgians, remaining in captivity from 28th April to14th September 1945.

Hinrich Ahrens died on 31st December 2009. He was buried on 6th January 2010 at the Stadtfriedhof in Grasberg.

During a large scale Soviet armour assault on October 16th, 1944, Ahren's PaK unit destroyed many of the 70 enemy tanks his division was credited with. It was during this action that Unteroffizier Ahrens earned his fourth Panzervernichtungsabzeichen (Tank Destruction Badge) for knocking out a Soviet T-34 with hand grenades.

Hinrich Ahrens commanded a Pak 36 gun crew during a major Soviet attack against his Divisions sector on the 16.10.1944. Positioned just to the north of Wirballen, he continued to fight with his Pak gun even after his entire crew had been wiped out by Soviet artillery fire. He inflicted heavy losses on the attacking Soviet infantry by firing high explosive rounds, and he continued to fight them off with hand grenades as the attackers pushed past him on either side and attacked from the rear. A group of 10 tanks then approached him. Ahrens knocked out the first one with the Panzerfaust and thereby forced the remainder to fall back.

After expending his ammunition he resolved that the gun would not fall into Soviet hands under any circumstances. He fought his way through the enemy ring back to his Bataillon command post, picked up some explosives and then headed back. Along the way he was badly wounded in the thigh, however he continued to storm forwards against the bewildered Soviets along with two other soldiers. He managed to blow up his gun and thereafter fight his way back to friendly lines with his two comrades.

Ahrens bravery here significantly contributed to the prevention of a Soviet breakthrough here. He would subsequently be awarded the Knights Cross in recognition of his actions. 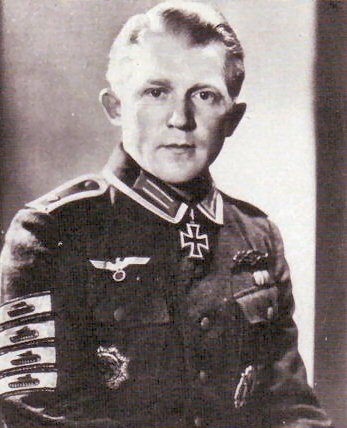