Amerkamp fought as a machine-gunner during his Divisions battles south of Gomel in October 1943. In this time the Soviets formed a bridgehead over the Dnieper near Chernigov, directly at the boundary of Grenadier-Regiment 459. Amerkamps Kompanie was ordered to contain it at all costs.

During a night attack the Soviets succeeded in pushing back the German lines at the boundary with the neighbouring Kompanie, pushing back Amerkamps unit about 200 metres. Amerkamps Kompanie launched a counterattack to retake the old positions, and although Amerkamp himself was able to eliminate 5 Soviets MGs the attack overall was bogged down due to the Soviet artillery fire.

Although Amerkamps squad leader had fallen out in this failed attempt, Amerkamp himself decided to try again. Taking along the five survivors of his squad (Obergefreiten Marth, Bösener, Veth and Niedersteberg as well as Gefreiter Bach), he was able to infiltrate back to the old lines without losses. After sending 2 men to restore contact with his Kompanie, and ordering another 2 to stay behind and form a strongpoint, Amerkamp and Gefreiter Bach moved out to roll up the trenches to the right. Utilizing an LMG, grenades, spades and flare pistols (!) they succeeded in restoring contact with the neighbouring Kompanie. Once again acting on his own initiative, Amerkamp moved out beyond the trenches with his comrades and worked his way to a shell hole in no-mans land. From here he provided flanking fire to both the left and right, thereby enabling the rest of his Kompanie to fully recapture the main battle line.

Amerkamp was duly recognized for his actions here with the reception of the Knights Cross. 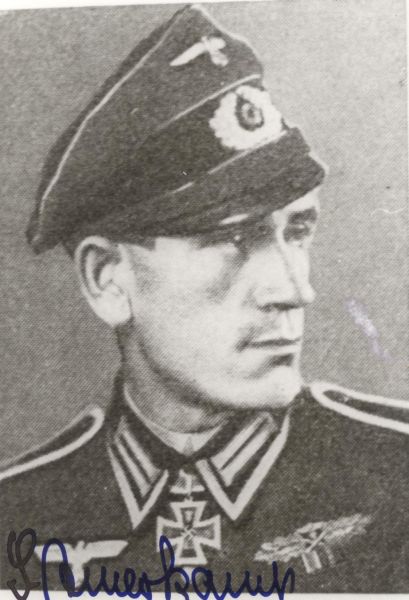