During February 1943 the Panzer-Pionier-Bataillon 32 was in position about 50 km northeast of Orel. The Soviets launched a tank-supported attack against this Bataillon in the middle of the month. Obergefreiter Arndt was thus given the task of proceeding to the forward strongpoint Dora and delivering orders for its garrison to pull back to the primary defensive strongpoint Cäsar.

Arndt had barely passed on these orders when the Soviets were upon the defenders. A tank opened up direct fire on Arndt himself, however Arndt managed to keep control over his nerves and allow the tank to come closer before destroying it with a T-mine. Despite the warnings of his comrades, Arndt remained in the strongpoint as the garrisoning Kompanie pulled back. Totally alone, he engaged the attacking Soviets with a captured co-axial machine-gun. A deadly game of cat and mouse followed, however Arndt was repeatedly able to evade the Soviets via an underground pipe system that the attackers were unaware of. Using this system, he was able to repeatedly appear in the Soviet rear and inflict heavy losses. He ultimately managed to return to the primary defensive strongpoint while also taking back 10 prisoners.

Arndt thereby managed to prevent a potentially devastating breakthrough despite being all on his own. He was awarded the Knights Cross for his bravery.

On the 30.11.1944 Feldwebel Arndt succeeded in preventing a major Soviet breakthrough north of Autz (Lithuania). During the course of their attack the Soviets succeeded in taking the German main battle line and thrusting far beyond it.

In response, Arndt rallied about 20 men and ordered them to mount up on 2 SPWs. With these he drove past the enemy tanks and their mounted infantry up to the old frontline. Upon arrival he and his men dismounted, captured the MG positions and then rolled up the trenches to either side. Arndt immobilized a T-34 tank with a T-mine. The crew bailed out and was taken prisoner. After this Arndt and two of his comrades clambered into the tank and turned its gun upon the attacking Soviet forces, destroying multiple Soviet tanks. This compelled the bulk of the attacking Soviet forces to retreat, although a few scattered squads became encircled behind the German lines and surrendered.

Arndt would later receive the Oakleaves for eliminating this Soviet penetration and thereby preventing a possible Soviet breakthrough. 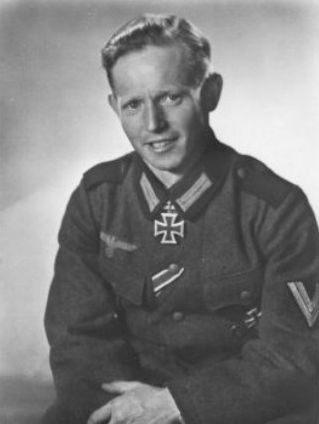 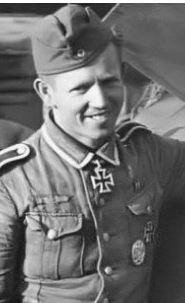