Son of farmers Franz and Ana, in April 1929 he finished primary school in Neuhofen, learned the profession of farming from his parents, visiting the Agricultural Winter School twice (Nov-34 to Mar-35 and Nov-35 to Mar-36).
In the spring of 1936 he was drafted into an Army light artillery unit in Munich.
From 08.04.1936 to 23.09.1936 he performed service at the Labor Front in Massing, in the construction of roads.
On 03.11.1937 Attenberger was called up, entering the 3rd Battery of the 7th Artillery Regiment in Munich.
He participated in the annexation of Austria and the Sudetenland. During this period, his unit was renamed 114th Artillery Regiment, framed within the 46th Infantry Division.
In September 1939 he took part in the invasion of Poland, after which the regiment moved on 04.11.1939 to Westphalia.
After taking part in the Campaign of France, fighting in Dunkirk, he moved with his unit to the Balkans in the spring of 1941, fighting in Yugoslavia.
In June 1941 he participated in the invasion of Russia, as ammunition conductor in the 3rd Battery of the 114th Artillery Regiment, fighting in the southern sector of the front, through Jassy in the Dniester and Perekop towards the Kertsch Strait.
On 30.10.1941 he was wounded by an explosion in the Kertsch Strait, on the Crimean peninsula. The 4 draft horses he was driving died, he received 29 splinters on his head, neck and thighs, being transferred initially to the Dnepetrovsk field hospital and later to Lindau.
At the end of May 1942, already recovered from his injuries, Attenberger returns to his unit, this time driving a tractor to transport artillery.
In December 1944 the Attenberger artillery regiment, after passing from Transylvania to Hungary, was hemmed in by the Soviet offensive northwest of Budapest along with other units. On the night of 04 to 05.12.1944, the unit tried to escape the encirclement. When driving his tractor dragging an artillery piece, Attenberger was wounded by machine gun fire in the leg, causing the vehicle to be damaged.
Despite the enemy fire that was trying to prevent the Germans from leaving through that sector, he ordered his companions to maintain their position and, by candlelight, proceeded to repair the damaged tractor. With great cold blood and calm, he drove the vehicle through the enemy-occupied town. A second tractor in his unit had been hit and was on fire. Attenberger volunteered to retrieve the artillery piece with his tractor. The enemy had reinforced and Attenberger had to break through the enemy lines under intense fire. Attenberger was again wounded in the thigh. Still, Attenberger managed to grab the artillery by shooting at the enemy and throwing hand grenades at him to keep him in line, sustaining shrapnel wounds to the face. Attenberger was about to be captured by the Soviets, but finally managed to reach the friendly lines that were trying to break the fence.
Despite his multiple injuries, Attenberger refused to leave his tractor until the breakthrough was successful. Shortly before reaching the German lines outside the fence, the tractor Attenberger was driving took a direct hit and started to burn. Attenberger managed to drive the tractor out of the danger area and before the flames reached the ammunition the vehicle was carrying, he saved a comrade who was on board from being burned to death, but he suffered burns on his hands. He also managed to put out the fire. Despite the damage to the tractor, Attenberger felt it was still fit for retrieval. He waited for the night to come and slipped between the lines to repair his vehicle. After 5 hours of repair, under enemy fire, he managed to start the tractor and return to his lines. Only then did Attenberger agree to be removed to the field hospital.
For this show of perseverance, courage and sense of duty, he was awarded the Knight's Cross of the Order of the Iron Cross on 21.01.1945.

awarded after fighting in Krivoi-Rog

During early December 1944 the troops of the 46. Infanterie-Division sought to retreat to the northern bank of the Ipel river. As the Germans were evacuating the bridgehead all of the motorized vehicles were ordered to pull back across the railroad bridge. One of the first vehicles to get onto the bridge was the RSO light hauler of Stabsgefreiter Attenberger. However the vehicle caught fire when it was still in the process of crossing. The presence of such a burning hulk on the structure would prevent any more German vehicles from getting across the bridge.

Recognizing this, Attenberger remained behind the wheel of his burning vehicle and attempted to completely cross the long bridge. The other German soldiers watched with bated breath as flames overtook the driver compartment itself. However Attenberger eventually got his vehicle to the other side, and upon reaching it he immediately jumped out and extinguished the flames on his uniform. Then the gas tank of his RSO finally exploded.

Thanks to Attenbergers brave actions here it was possible for the remaining German elements on the southern bank of the Ipel to evacuate the bridgehead. He was thus awarded the Knights Cross in recognition of this feat. 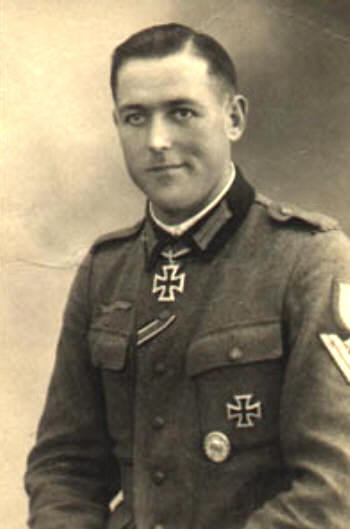 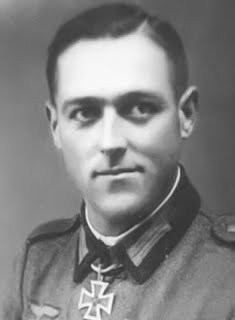