Served with the West-German Bundeswehr after the war from 1st June 1956 until 9th May 1962, with the last achieved rank of Oberst.

Hauptmann Behnke thrust into the enemy lines with his Abteilung and thereby made a significant contribution to the holding of an important bridgehead between the Volga and the Don.

"In the defensive battle northwest of Baranov a battle group of assault guns and pioneers led by Major Behnke distinguished themselves by showing unwavering perseverance."

Major Behnke has decisively influenced the fighting in the Opatowka bridgehead through his personal bravery and independent initiative. During the time period 08.-17.08.1944 he tied down and smashed strong hostile tank forces and thereby prevented the enemy from carrying out their operational objective (namely to achieve a breakthrough to OzarowAnnopol and encircle the bulk of the XXXXII. A.K. and LVI. Pz.-Korps).

On the 08.08.1944 the enemy broke through to the north in the direction of Stodely with 3 armoured artillery brigades. In response Major Behnke was dispatched with his armoured group and a few mounted Pionieren to thrust southwards against the bridge sites of the Opatowka. However the enemys great strength (particularly in tanks and anti-tank guns) condemned this thrust to failure. At this time Major Behnke knew that Gruppe Hansen had set up a blocking position along the line GierczceStodolyJanowice with supply troops and a hastily rounded up assortment of units. He also knew that the Gruppe had ordered an attached Pionier-Kompanie to launch a thrust of its own. He thus made the independent decision to cooperate with this group. This decision would prove to be of decisive importance for the subsequent combat. Supported by the Sturmgeschützen, this thrust achieved a 4 km deep penetration into enemy territory as far as Sadlowice. The enemy had clearly been deceived by the apparent weakness of the blocking group immediately in front of it.

The ruthless employment of Major Behnkes Sturmgeschütze as part of this ragtag Gruppe made it possible for the unit to hold off the enemy for 11 days, a time in which it also managed to launch its own thrusts deep into the enemy. In total the enemy lost 122 tanks and 40 artillery pieces during this time, some captured and some destroyed.

Major Behnke participated in all of his operations in either a Volkswagen or on foot, and on many occasions he succeeded in inspiring the relatively combat-inexperienced German infantry to follow the lead of the Sturmgeschütze.

On the 16.08.1944, just as he was returning from a pursuit thrust at Grochocice, he immediately went over to the defense in the face of an enemy attack that was being launched on a broad front and with numerous tanks. He showed incredible bravery, and once again drove in an unarmoured vehicle alongside his Sturmgeschütze. His unit succeeded in destroying 44 enemy tanks on this decisive day, and the enemys advance along the OpatowOzarow road was brought to a halt. This in turn secured the arrival of fresh friendly forces.

Personal devotion to duty, initiative, a total tally of 92 enemy tanks destroyed by his unit in 11 days and the creation of an operational opportunity. These are the results caused by the actions of Major Behnke, and they are so incredible that he clearly appears to be worthy of the high award of the Oakleaves to the Knights Cross of the Iron Cross.

Major Behnke and his Kampfgruppe were named in the Wehrmachtbericht of the 27.08.1944.

This success report reads as follows 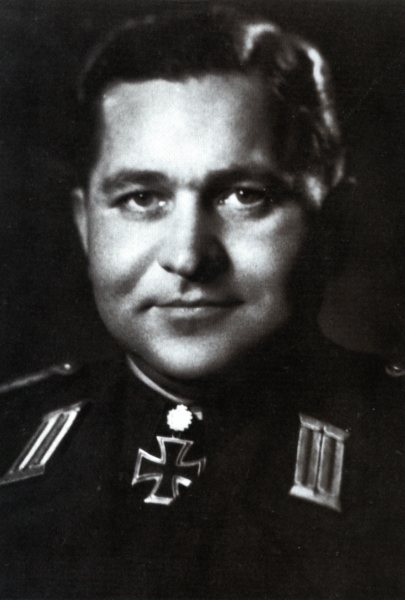