Awarded for his multiple achievements at the front, which included the following

1) Leading a daring patrol near Orsogna with another soldier. Here the two men snuck into the attic of a house that was being used as the command post by a British regiment. He and his comrade observed the enemy for 38 hours and returned to the German lines with valuable intelligence.

2) Defending a bridgehead southwest of Savio at the end of October 1944. On one morning his Kompanie came under attack by 10 tanks and a battalion of infantry, however this attack was repulsed. The Allies renewed their attack in the afternoon, this time against the left neighbour. Here they achieved a 1 km deep penetration with 9 tanks and infantry, all while covering Donths sector with artillery fire. An enemy battalion supported by 20 tanks then advanced towards Donths Kompanie and the road it was defending under the protection of a creeping barrage. Donth launched a counterattack with his Kompanie HQ squad, destroyed 6 Sherman tanks with his men in close combat and continued the counterthrust against the enemy infantry. He and his men relieved two encircled friendly squads and subsequently liberated 4 heavily wounded comrades that had been captured by the enemy.

3) His defensive success on a hill east of Bologna near the end of November 1944. Here Donth launched a stormtroop like attack against an allied jump-off position without any artillery preparation in order to restore the combat situation. This operation was a complete success. He and his men captured 81 prisoners (including 3 officers) as well as the equipment of two companies.

4) Launching a night attack in platoon strength against a British battalion in December 1944, forcing the latter to give up control of Monte Castellaro.

Date awarding 14th June 1944 according to announcement in Luftwaffen-Verordnungsblatt. 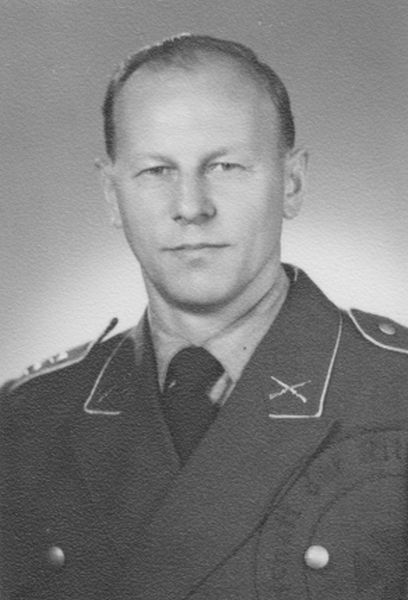