Rudolf Buhse served with the Bundeswehr from 1st October 1956 until 30th September 1962, where he reached the rank of Brigadegeneral.

Oberstleutnant Buhse was assigned command of Infanterie-Regiment 47 starting on the 19.03.1942. Prior to this he was the commander of III./Infanterie-Regiment 47. On the 29.09.1941 he was recommended for the Knights Cross by the IIa of the 22. Infanterie-Division due to his achievements during the fighting for the Dnieper crossing at Berislaw. However instead he received the Commendation Certificate of the Supreme Commander of the Army on the 22.10.1941 as well as the German Cross in Gold on the 28.10.1941.

Oberstleutnant Buhse continued to distinguish himself following the fighting at the Dnieper. Under his command the III./47 achieved notable success during the breakthrough battles through the Perekop isthmus on the 18.10.1941. On this day his unit achieved a deep penetration into the enemy positions. In the process the Bataillon outstripped the neighbouring units and found itself in a particularly serious situation amidst the heavily fortified and coverless terrain. However Oberstleutnant Buhse was able to master this crisis. His Bataillon went on to have a major share in the final breakthrough of these positions.

Buhses Bataillon would go on to be heavily involved in the successes of the Division during the assault against Sevastopol on the 17.12.1941 and in the defensive fighting before the fortress that followed.

After being assigned command of Infanterie-Regiment 47 on the 19.03.1942 he went on to participate in the assault against Sevastopol on the 07.06.1942. On this day his Regiment found itself on the left wing of the 22. Infanterie-Division (the main attacking unit) and in contact with the 50. Infanterie-Division on the left. The Regiment was reinforced by the 2./Pi. 22, 1 Batterie from the Sturmgeschütz-Abteilung 190, the III./s.W. Regiment 1, elements of Panzerabteilung 300 and 5./Flak 501. The mission of the 22. Infanterie Division was as follows:

In the context of this mission the reinforced Infanterie-Regiment 47 was assigned the following task:

Over the course of bitter combat that lasted up the the 11.06.1942 (with resultant heavy casualties) the Infanterie-Regiment penetrated deep into enemy positions as far as the fuel depot without regard for the progress of neighbouring units. Further progress was made impossible due to the strong enemy presence on both flanks of the Regiment.

On the 18.06.1942 the Russian 138th rifle brigade began its attack on the depleted Regiment, which by now only had a trench strength of about 120 men from all its rifle and MG Kompanien due to the previous fighting and the particularly strong enemy artillery fire. This fresh brigade had been brought up just 3 days prior and now sent in an assault wedge along the railroad in a northerly direction towards Point 639 from the western entrance to the railroad tunnel southwest of the fuel depot near Point 604. A second assault wedge struck further north at Points 664 and 640 against weak elements of the Infanterie-Regiment 47 that had been forced to occupy a broad front. The Russians managed to achieve a penetration about 2 km deep, which in some places reached the road connecting Points 630 and 643.

After hearing of the Russian attack Oberstleutnant Buhse immediately rushed through the Russian wall of fire to his forward fighting elements. Here he immediately created a defensive front with the available weak elements of his Regiment, which included elements of his regimental staff, the regimental Pionier and Cavalry Zug, 2-cm Flak guns, elements of Artillerie-Abteilung command posts in the area and soldiers from the firing positions of infantry guns and Nebelwerfers. Local counterthrusts immediately threw back or destroyed the foremost Russian forces. Through this the Russian attack was effectively stopped, a feat above all attributable to the determined personal intervention by Oberstleutnant Buhse. After elements of Panzerjägerabteilung 22 and a Panzer-Kompanie had been brought up Oberstleutnant Buhse launched a deliberate attack against the bulk of the broken-in enemy with two shock groups, one from the Mekensiewy-Gori railway station and one from the so-called Forsthaus. Although the Russians had heavy artillery support directed from commanding observation posts south of the Sswernaja Bay they were nonetheless thrown back with heavy losses, and the old frontline was recaptured.

Thanks to the determined and swift intervention by Oberstleutnant Buhse the Russian plan to split the German assault front on the 18.06.1942 with a fresh unit was prevented. The immediately enacted countermeasures resulted in the near-complete destruction of the 138th Russian rifle brigade. 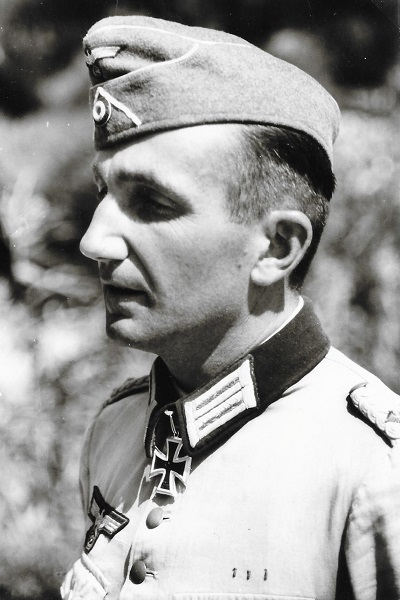