Otto Riehs was born August 12th, 1921 in Marienbad in former Czechoslowakia, at the time part of the Austro-Hungarian Empire, the son of a tailor, a profession he initially was employed in himself. On April 1st, 1939. he was incorporated into the Arbeitsdienst (Labor Service). He became Arbeitsdienstführer (foreman) and 18 months later, he was taken up in the Heer (Army) as Truppführer (section leader) with the rank of non-commissioned officer.
October 1st, 1940, Otto Riehs joined the Infanterie-Panzerjäger 95 (Infantry tank destroyers) and following his training, he was posted to 14.(Panzerjäger) / Infanterie-Regiment 55 / 17. infanterie-Division in 1941 as Lade- und Richtschütze (loader and aimer). At the end of the war he commanded a Pakzug (anti-tank guncrew) in the fortress of Posen. He was seriously wounded and was taken Prisoner-of-War by the Russians; he was released in 1949.
After World War two, Otto Riehs found employment as truck  and cabdriver. From the early fifties onwards, he was involved in neonazi organisations. He was a member of the Sozialistischen Reichspartei until it was prohibited in 1952. Subsequently he was active in the Nationaldemokratischen Partei Deutschlands. In 1989 he offered himself for election in the Freiheitlichen Deutschen Arbeiterpartei during the European elections and he was a candidate for the city council of Frankfurt am Main. In February 1989, the party was prohibited by the Innenministerium (Department of the Interior). He was also named honorary member of the Kampfbund Deutscher Sozialisten. Otto Riehs acted many times as spokesman at neonazi meetings and demonstrations.
Some sources incorrectly refer to him as Otto Rieß or Otto Riess
Otto Riehs passed away May 29th, 2008.

Obergefreiter Riehs received the Knights Cross for his actions during the fighting near Posen, where he destroyed 10 tanks in 12 minutes using his PAK 75mm anti-tank gun. 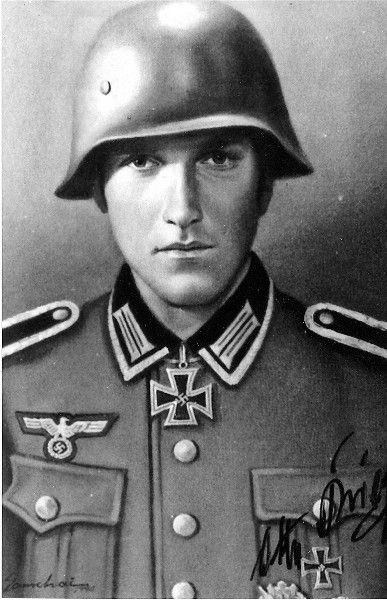