On the 24.12.1944 SS-Hauptscharführer Frauscher, point Zugführer in the I./SS-Panzer-Regiment Das Reich, had the mission of launching an energetic night attack into the flank and rear of the enemy. He was to break through along the road from Odeigne via Point 538-Manhay-Grandmenil to Erezee, and thereby open the way for the rest of the Kampfgruppe.

Frauscher and his Zug began their advance while the barrage against Point 538 was ongoing. Already after they had gotten to a point 300 metres past the crossroads they came under attack from 3 Shermans that fired from both the front and flank. Frauschers Panzer was immobilized by damage to the intermediate gear. In less than a few minutes he had mounted up on the vehicle of his group leader, continued the battle and thrust further forwards after the encountered enemy had been destroyed. At the road fork 2 km west of Malempre the attack threatened to stall under the combined fire of 10 dug-in Shermans.

Frauscher immediately took up the firefight at a range of 300 metres, destroyed 4 Sherman tanks right off the bat and held out long enough for the follow-up Kompanie to enter the battle. The remainder of the enemy were knocked out or forced to flee. He immediately continued pressing his ruthless attack, overran any enemy resistance encountered, brushed aside identified wood barriers and was the first to reach the crossroads at Manhay. He would hold onto this position despite strong enemy resistance until the arrival of the rest of the Abteilung.

Frauscher also led the spearhead of the Abteilung in the subsequent attack against Grandmenil. It is above all thanks to SS-Hauptscharführer Frauschers courage, intrepidity and decisiveness that the first deliberately employed enemy tank forces were overrun while doing a maintenance halt, and that their strong advanced security forces were completely crushed. The bulk of the enemy was badly battered.

Thanks to the incredible attacking spirit of the point Zug, which was passed along to the entire Abteilung, the preconditions were created to firmly occupied the Manhay sector (despite the strong enemy countermeasures), and furthermore smash the enemys planned flanking thrust just a few hours before it took place.

Of the 44 enemy tanks eliminated during the night battle (several of these fell undamaged into our hands), Frauscher alone destroyed 9. 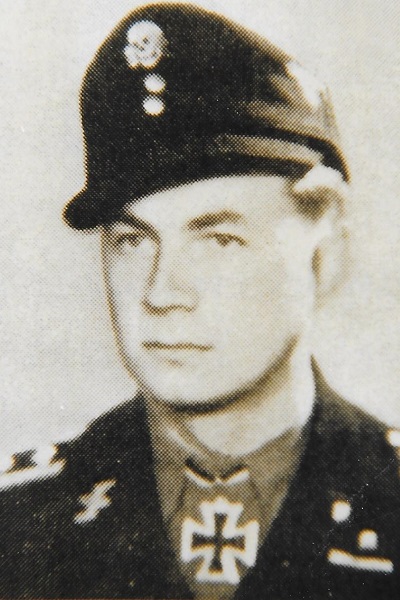