"For exceptionally meritorious conduct in the performance of outstanding services to the Government of the United States as Operations Officer of an Amphibious Task Force in planning and coordinating the joint activities of the Navy with those of the Army preliminary to the invasion of Sicily on 10 July 1943. In addition to the successful preparation of initial cruising and approach plans, Commander Buchanan directed the juncture of three complete convoys with such superb skill and sound judgment that all units of the Attack Force were landed at designated beaches in exact accordance with pre-arranged schedule. His aggressive leadership and tireless devotion to duty during actual combat operations both during and after the initial landings contributed to the accomplishment of an intricate and highly important task. (Commander Buchanan is authorized to wear the Combat "V".)"
Combat V

"For extraordinary heroism as Officer in Tactical Command of a Radar Picket Station Unit during action against enemy Japanese forces at Okinawa in the Ryukyu Chain, on 12 April 1945. When an overwhelming force of Japanese aircraft flew in over his Task Force and launched a vicious suicide attack, Captain Buchanan fought his ships gallantly throughout the fierce engagement and, despite the tremendous odds, contributed to the success of his unit and cooperating combat air patrol squadron in accounting for more than thirty enemy aircraft shot down with minimum loss in personnel or damage to his own Task Force. An inspiring and forceful leader, highly skilled in the strategies of naval warfare, Captain Buchanan, by his superb direction of his ships' gunfire, his valiant conduct and courageous devotion to duty throughout this intensive action, contributed materially to the success of the bitterly fought Okinawa campaign and upheld the highest traditions of the United States Naval Service."

"For exceptionally meritorious conduct in the performance of outstanding services to the Government of the United States as Commander Destroyer Division 126 from November 1944 to 15 May 1945, and as Commander Destroyer Squadron 63 from 15 May 1945 to September 1945. Destroyer Division 126 served in close support of troops at Iwo Jima delivering gun fire support and call fire, and in screening on radar picket duties at Okinawa. The division shot down eighteen Kamikazes in ninety minutes on 12 April. On 15 May 1945, Captain Buchanan assumed Command of Destroyer Squadron 63, and became Section Screen Commander at Okinawa, continuing duties as Officer in Tactical Command of the Radar Picket Stations. The great courage, leadership, and professional skill displayed by him during this period of extremely hazardous operations, contributed materially to the success of these campaigns. His conduct and devotion to duty were outstanding and were at all times in keeping with the highest traditions of the United States Naval Service."
Second LoM received as Gold Star on ribbon

"For exceptionally meritorious conduct in the performance of outstanding services to the Government of the United States from January 1962 to May 1964 as Commander Hawaiian Sea Frontier, Commandant, FOURTEENTH Naval District; and Commander, U.S. Naval Base, Pearl Harbor. In his capacity as Commander Task Force 130 (the Project MERCURY Recovery Force in the Pacific), Rear Admiral Buchanan was responsible for the planning, organization, development, and command of the astronaut recovery organization in the Pacific Ocean areas. By his tireless personal and active participation in the operations, he assured the successful recovery operations of Commander Walter M. Schirra, Jr., USN, and his space capsule SIGMA 7 on 3 October 1962; and of Major Leroy G. Cooper, USAF, and his space capsule FAITH 7. on May 16, 1963."
Third LoM received as second Gold Star on ribbon 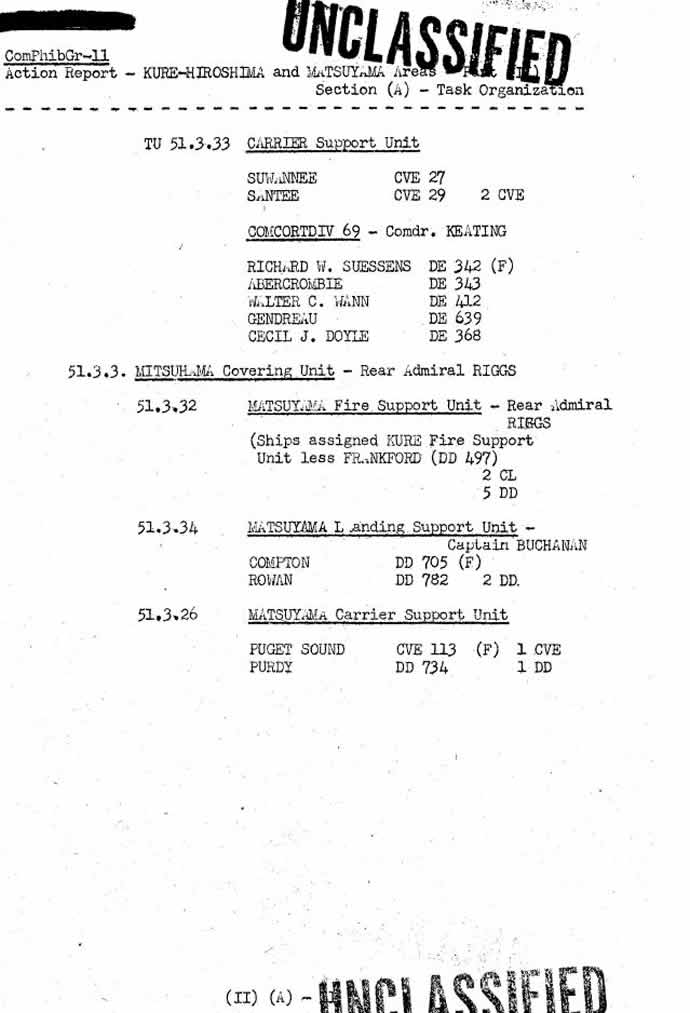