On the 29.06.1942 Oberstleutnant Daniel led his Regiment in a breakthrough of the inner fortification ring of Fortress Sevastopols southern front while demonstrating outstanding leadership and the highest personal bravery.

He was at the spearhead of his Regiment as it stormed the Sapun heights with unstoppable energy, and together with his foremost Bataillon he broke through the powerfully constructed enemy position. Then, without waiting for orders or the neighbouring units, he thrust forward beyond his attack objective on his own initiative. By doing so he laid for the groundwork for the swift carrying out of the attack towards the south and the opening of the decisively important serpentine road. Control of this road enabled the heavy weapons (including Sturmgeschütze) to follow up in the wake of the assault.

His bravery was decisive for the fall of Sevastopol. I thus ask for the award of the Knights Cross to Oberstleutnant Daniel.

1.) On the night of the 14./15.02.1945 the 45. Volksgrenadier-Division took over the positions of the 208. Infanterie-Division along the line KnischwitzLauden (in the Strehlen area) in the midst of an ongoing enemy attack from the east. The left divisional (and simultaneously Korps) boundary was located along Grün-Hartau (inclusive)Schweinbraten (inclusive) (see map excerpt).

On the 15.02.1945 the enemy (who was continuously receiving reinforcements before the left divisional sector) penetrated into the sector of the left neighbour following several failed attacks. They took Dtsch-Lauden and thrust westwards along the axis KampenKarolinenhof. By capturing Kampen the enemy were in a position to threaten the deep open flank of the Division. The divisional commander, Generalmajor Daniel, immediately rushed to the threatened area. However, before he could set up a new defensive frontline to the northeast of Grün-Hartau, the enemy conducted a battalion-sized attack out of Kampen against Grün-Hartau and entered into the village. Generalmajor Daniel immediately led 3 Sturmgeschütze forwards and launched a counterattack against Grün-Hartau. The 3 Sturmgeschützen were escorted by an escorting Zug of Grenadiers. This counterattack managed to strike the not-yet consolidated enemy troops in Grün-Hartau from a tactically favourable direction. The village was recaptured and the enemy thrown back towards the north.

This personal intervention by Generalmajor Daniel laid the groundwork for a further counterattack against Kampen, and he immediately employed a Bataillon from his Division for this purpose. The General personally accompanied the Bataillon as it stormed forward, and in the ensuing combat they managed to throw back the enemy that had pushed beyond Kampen as well as advance up to the southern edge of Kampen itself. With this the present danger for the friendly deep flank was eliminated, and the enemy were unable to carry out their intended thrust to the southeast (which would have led to the loss of Strehlen).

On the 16.02.1945 the enemys overwhelming forces launched an attack against Grün-Hartau and Grögersdorf from the north and northeast. This onslaught succeeded in achieving a penetration in the new frontline, which was largely being held by Gneisenau units. Grün-Hartau and Grögersdorf were taken, and the enemy also managed to push into Karzen in a swift follow-up thrust. Generalmajor Daniel (who was in the thick of the fighting as always) at once rallied a Kompanie and 3 Sturmgeschütze, launched an immediate attack without artillery support and threw the enemy back to the north. The enemy suffered notable losses in this attack that he personally led. Generalmajor Daniel subsequently gathered up all the scattered elements in his vicinity and personally led them forwards to the line NassBrockguthKarzen despite the strongest enemy fire. He succeeded in creating a blocking front along this line and thereby prevented the enemy from achieving their sought-after breakthrough towards the southwest.

During these two days of combat Generalmajor Daniel was always to be found wherever a crisis situation threatened to develop. It was only thanks to his personal intervention that his young and inexperienced unit could be continually regrouped and deployed for a renewed defense.

2.) At 04:00 on the 15.03.1945 the Russians began a major offensive from the Grottkau area towards the south as anticipated. The enemy supplemented their great superiority in men and materiel with a major drumfire artillery preparation, and over the course of the first day of combat they broke through the friendly frontline in multiple locations and penetrated into the Diana Position. Supported by numerous tanks, on the afternoon of this day they entered into Winzenberg, Koppendorf and Falkenau. They were finally brought to a halt before the Hubertus Position in extraordinarily heavy fighting, however on the following night the enemy succeeded in achieving a surprise penetration into Gross-Briesen with a force of 15 tanks and 2 infantry battalions.

As no further infantry forces or mobile anti-tank units were available at this moment, Generalmajor Daniel drove to Gross-Briesen at 05:00 on the 16.03.1945. His aim was to guard against the impending breakthrough to the south through his personal intervention on the spot. The heroically fighting I./Pz.Gren.Rgt. 20 threw the enemy back out of Gross-Briesen in heavy urban combat and destroyed all 15 enemy tanks in close combat with the support of Sturmgeschützen. Generalmajor Daniel subsequently directed all the available units in Gross-Briesen and Friedewalde to occupy the Hubertus Position while also taking all the necessary measures for the continued defense.

Generalmajor Daniel returned to his divisional command post in Waltdorf at around midday, but he had barely arrived when the enemy once again struck with the support of a preparatory artillery barrage and strong aircraft support. They penetrated into Gross-Briesen and Friedewalde, and our friendly infantry (which had already sustained heavy losses) were pushed back to the south. The General immediately drove to the break-in point once again. Escorted only by an Ordonnanz-Offizier, he stopped the friendly infantry north of Breitenfeld and personally built up a new defensive line. Personally fighting with MG and rifle, he proceeded to repulse the enemy troops that were attacking southwards from Friedewalde. Despite having been shaken from the preceding drumfire, the Grenadiers took new courage from their General and were themselves able to hold the new frontline against further Russian attacks.

After this Generalmajor Daniel drove to Hennersdorff, gathered up all the available Grenadiers/Sturmgeschütze there despite the renewed enemy drumfire and proceeded to personally lead a counterattack against Geltendorf. After capturing this village he was able to create a new defensive front that connected with the frontline north of Breitenfeld. He thereby prevented a potential enemy penetration towards the south through this display of personal intervention and devotion to duty.

The enemy continued to attack without pause, and once again they managed to eject our Grenadiers out of the newly created frontline at multiple locations. For the third time on this day the General drove to the hotspots of the fighting. He inspired the Grenadiers forward and once again prevented a breakthrough. In this time he personally fought in the foremost line with MG and rifle in hand.

Generalmajor Daniel is solely responsible for ensuring that the defense front did not collapse on the 16.03.1945. During the course of this day a total of 79 enemy tanks were destroyed in the Divisions sector, and the Russian infantry likewise sustained major losses.

On the 18.03.1945 the enemy took the village of Riemertsheide following a drumfire-like artillery preparation and bitter urban combat. This appeared to open up the enemys path to the commanding hills in the Neisse valley as well as the city of Neisse itself. Generalmajor Daniel once again drove forward and personally created a new frontline on the commanding hills north of the Neisse valley (namely the Kümmelberg and Kapellenberg) using whatever infantry could be scrounged up. Here, as in all the previous days of fighting, the General rushed from squad to squad in order to inspire his men through his own devotion to duty. In the process he was badly wounded by a shell splinter while in the vicinity of the Kümmelberg.

Non numbered awarding. Awarding still uncertain. When numbered this would have been the 857th Award. 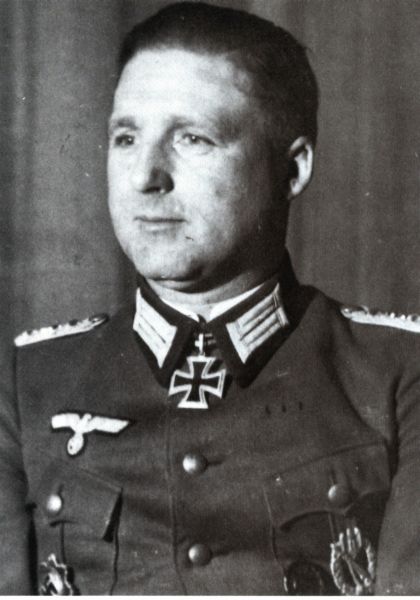