On the 18.04.1941 Oberstleutnant Decker distinguished himself while leading at the head of Kampfgruppe Balck. He and his troops crossed over the Pinios, broke through the Australian/New Zealanders fortified line, thrusted towards Larissa and thereby forced the enemy to give up their Olympus position. By smashing the Yugoslavian defense in the Strumica basin he created the necessary conditions for the 2. Panzer-Divisions thrust to Salonika.
306th Award.
Submitted on June 3rd 1941.
Preliminary document and decoration on June 17th 1941 to stellv. VII. AK.

The following wartime excerpt describes why Decker was awarded the Oakleaves

For the outstanding leadership of the 5. Panzer-Division north of Rogatschew in the time period 22.02.-21.03.1944 and the subsequent relief battles at Kovel. On the morning of the 05.04.1944 contact was established with an outermost strongpoint of Fortress Kovel; the villages of Dubowa and Rudniki (northwest of the city) were taken.

The following press article, dated 08.05.1944, provides further details as to these actions

At the end of February 1944 the Soviets achieved a penetration north of Rogatschew, and in response the 5. Panzer-Division was thrown into battle in a piecemeal fashion as soon as each Bataillon arrived. In order to buy time for the arrival of further forces Generalmajor Decker created a thin, strongpoint-like defensive front that initially halted the enemy advance. However on the next day the Soviets attacked the weak elements of the 5. Panzer-Division with 3 of their own divisions. They launched an enveloping thrust through a gap in the German frontline with strong forces and proceeded to a key German position along the Pruth river. To deal with this the divisional commander rushed to the threatened site with a handful of reserves, a few heavy Pak guns and a Kompanie of Pioniere. He set up a defense just before the Soviets arrived and in the ensuing battle, during which he personally fought in the foremost line and positioned the Paks, he and his men defeated all enemy attacks until the arrival of friendly reinforcements. A few days later, on the 02.03.1944, the Wehrmachtbericht reported that in this fighting the Silesian 5. Panzer-Division under the command of Generalmajor Decker had outstandingly acquitted itself. This was the second time within three months that Generalmajor Decker and his Division had been named in the Wehrmachtbericht.
466th Award.
Submitted on April 24th 1944.

For the thrust of Panzer-Division Clausewitz under his Korps command. Deckers mission was to thrust from the Uelzen area towards the south via Helmstedt, with the ultimate aim of establishing contact with the 11. Armee in the Harz. Initial successes were achieved, and these led to the occupation of the bridges over the Weser-Elbe canal at Fallersleben. The Division thereby accomplished its mission of tying down enemy forces and relieving the pressure on our forces positioned at the Elbe river on both sides of Magdeburg.

149th Award.
Numbering was made in relation to the presumed awarding date. No evidence available in the Bundesarchiv. 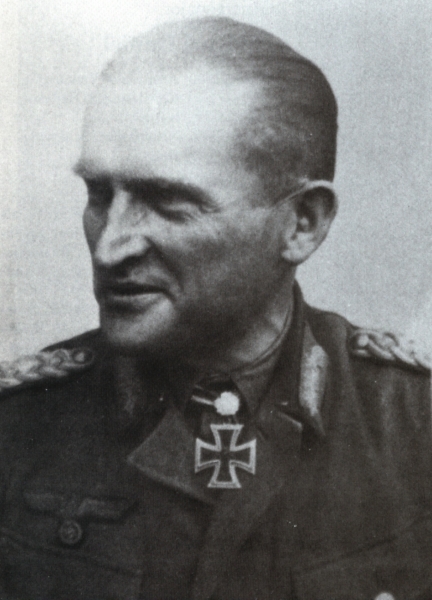