"He was in charge of a squad of the 2d Platoon in the vicinity of Stolberg, Germany, early in the morning of 24 September 1944, when 2 enemy companies supported by machineguns launched an attack to seize control of an important crossroads which was defended by his platoon. One American squad was forced back, another captured, leaving only S/Sgt. Schaefer's men to defend the position. To shift his squad into a house which would afford better protection, he crawled about under heavy small-arms and machinegun fire, instructed each individual, and moved to the building. A heavy concentration of enemy artillery fire scored hits on his strong point. S/Sgt. Schaefer assigned his men to positions and selected for himself the most dangerous one at the door. With his Ml rifle, he broke the first wave of infantry thrown toward the house. The Germans attacked again with grenades and flame throwers but were thrown back a second time, S/Sgt. Schaefer killing and wounding several. Regrouped for a final assault, the Germans approached from 2 directions. One force drove at the house from the front, while a second group advanced stealthily along a hedgerow. Recognizing the threat, S/Sgt. Schaefer fired rapidly at the enemy before him, killing or wounding all 6; then, with no cover whatever, dashed to the hedgerow and poured deadly accurate shots into the second group, killing 5, wounding 2 others, and forcing the enemy to withdraw. He scoured the area near his battered stronghold and captured 10 prisoners. By this time the rest of his company had begun a counterattack; he moved forward to assist another platoon to regain its position. Remaining in the lead, crawling and running in the face of heavy fire, he overtook the enemy, and liberated the American squad captured earlier in the battle. In all, single-handed and armed only with his rifle, he killed between 15 and 20 Germans, wounded at least as many more, and took 10 prisoners. S/Sgt. Schaefer's indomitable courage and his determination to hold his position at all costs were responsible for stopping an enemy break-through." 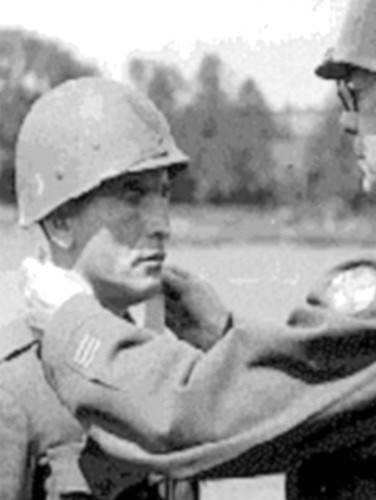