Citation:
"For conspicuous gallantry and intrepidity at risk of life above and beyond the call of duty, on 12 May 1944, near Mount Damiano, Italy. As 2d Lt. Shea and his company were advancing toward a hill occupied by the enemy, 3 enemy machineguns suddenly opened fire, inflicting heavy casualties upon the company and halting its advance. 2d Lt. Shea immediately moved forward to eliminate these machinegun nests in order to enable his company to continue its attack. The deadly hail of machinegun fire at first pinned him down, but, boldly continuing his advance, 2d Lt. Shea crept up to the first nest. Throwing several hand grenades, he forced the 4 enemy soldiers manning this position to surrender, and disarming them, he sent them to the rear. He then crawled to the second machinegun position, and after a short fire fight forced 2 more German soldiers to surrender. At this time, the third machinegun fired at him, and while deadly small arms fire pitted the earth around him, 2d Lt. Shea crawled toward the nest. Suddenly he stood up and rushed the emplacement and with well-directed fire from his rifle, he killed all 3 of the enemy machine gunners. 2d Lt. Shea's display of personal valor was an inspiration to the officers and men of his company." 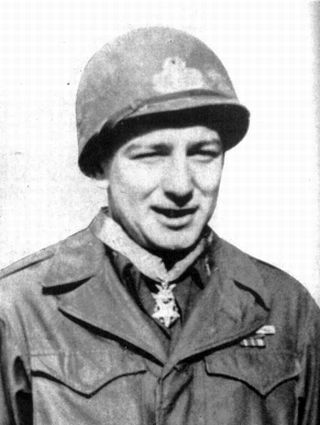