Dennhardt was recommended to receive the "Eichenlaub" on APril 11th, 1945. The recommendation was received at the OKH / PA / P 5 on April 19th, 1945, but was not processed due to the ending of the war. At the time of the recommendation, Dennhardt was Führer Grenadier-Regiment 1143 with the rank of Major.

Received vor an action south of Samoschje on October 6th 1943.

The following article from the Naumberger Kurier (dated 07.05.1944) describes why Dennhardt would be awarded the Knights Cross

Major Oskar-Hubert Dennhardt took over command of the Leipziger Grenadier-Regiment in place of its sick commander 10 days before the second Soviet offensive against Vitebsk was launched. The Regiment was involved in heavy defensive combat for days from its positions southeast of the city. On the first day, following a 90 minute artillery barrage, the enemy deeply penetrated into the defensive line at the boundary with the left neighbour while simultaneously laying down heavy flanking fire on Dennhardts Regiment. Major Dennhardt saw a 1 km wide frontline gap open up on the left wing of his combat sector. However the front of his Regiment was itself under pressure from strong Soviet forces, and was holding out only with all the effort that could be mustered.

Even so he brought up his last major reserves and reinforced them with individual Grenadiers taken out of the hard-pressed frontline. He then personally launched a counterthrust towards the left while at the spear tip of this small storm troop. He recaptured a portion of the lost terrain and prevented the enemy from penetrating deeper into the German rear, and by doing so the situation was somewhat stabilized. However he and his troops had to fend off another 6 attacks on this day and then another 9 further major attacks on the following three days, a period in which Dennhardt constantly fought in the foremost line with his men.

Then a new crisis developed on the fourth day. However here the Major also succeeded in throwing back the broken-in enemy forces and closing the breach. He furthermore was able to clean up another break-in point further towards the north at the head of a few Grenadiers. Although he was wounded in the process the Major continued to lead his storm troop and went on to establish a new, continuous security line. Here he was wounded again, and this time heavily enough to force him to be evacuated. These were his 11th and 12th wounds.

The following divisional order of the day, dated 29.03.1944, provides further detail as to these actions

On the 17.03.1944 the Führer awarded the Knights Cross of the Iron Cross to Major Dennhardt, commander of Grenadier-Regiment 11.

Major Dennhardt began his career in 1934 as an officer candidate in Infanterie-Regiment 11. After being promoted to the officer ranks he then transferred to Infanterie-Regiment 53. Here he distinguished himself as a Kompanie commander, regimental adjutant and Bataillon commander during the Polish, French and Russian campaigns. In the autumn of 1943 he received the Anerkennungsurkunde des Führers for his decisive deeds as commander of the II./Grenadier-Regiment while it was serving with the 206. Infanterie-Division.

During the 2nd Defensive Battle of Vitebsk the Grenadier-Regiment 11 under the command of Major Dennhardt (who had taken over from the sick regimental commander) found itself at the hotspot of the fighting. On the 06.02.1944 it was involved in the heavy fighting for the Nowiki bridgehead, and on this day a 1 km gap formed along the boundary with the left neighbour. This gap threatened both the left flank of the Regiment as well as the entire bridgehead. However Major Dennhardt personally led a counterthrust in response, and by employing his last reserves in this way he prevented a deep enemy breakthrough towards the VitebskOrsha railway line.

Later, on the 10.02.1944, the Russians once again achieved a penetration at the left wing and thrust through to Pawljutschenki. However Major Dennhardt likewise succeeded in preventing a Russian breakthrough at this location by personally leading a counterthrust and creating a security line with the last rounded up available friendly units. In the process he sustained his 12th wound.

Ultimately Major Dennhardt and his Kampfgruppe succeeded in holding their ground in days of fighting against an onslaught by 5 Russian rifle divisions, a tank brigade and extraordinarily strong enemy artillery support. These decisively important deeds by Major Dennhardt and his Kampfgruppe majorly influenced the course of the battle, and they were recognized with the award of the Knights Cross to the Iron Cross.

I give my heartiest congratulations to Major Dennhardt on behalf of the whole Division for receiving this high honour.

Major Joachim Domaschk, who processed the nomination at the Heerespersonalamt (HPAArmy Staff Office) from the troop, had sent a message to the AOK Ostpreußen on 28-3-1945 requesting an approval from the Armeekorps and the Armee. This approval was never received before the end of hostilities. Oskar-Hubert Dennhardt is not listed in the book for the "nominations for the higher grades of the Knight's Cross of the Iron Cross" nor in the nomination book for Knight's Cross (starting with Nr. 5100). According to the Association of Knight's Cross Recipients (OdR) the award was presented in accordance with the Dönitz-decree. This is illegal according to the Deutsche Dienststelle (WASt) and lacks legal justification. The sequential number "870" and the presentation date were assigned by the OdR. Dennhardt was a member of the OdR.

On the 08.04.1945, following two-and-a-half days of intense defensive combat in the northwestern part of Königsberg, Major Dennhardt created a new Regiment with the number 1143 from the shattered three Infanterie-Regiments of the Division. After his left wing had been taken over by the 5. Panzer-Division he then proceeded to establish his ordered new defensive line in the area MetgethenModittenStp. Holstein.

On the same day the enemy penetrated into the Divisions protruding frontline at Moditten after a heavy artillery preparation, and in doing so they threatened the Divisions left flank and the 5. Panzer-Divisions right flank. Immediately after this penetration Major Dennhardt personally launched a counterthrust with the assembled assault Zug of the Regiment. Even though this unit was only 17 men strong he nonetheless was able to throw the enemy out of Moditten.

At 10:30 on the 09.04.1945 the enemy repeated their attack, this time at the Moditten brickyard, and there they penetrated into our defensive line. Major Dennhardt also immediately launched a counterthrust here with 11 Pionieren and threw back the enemy.

Success: Restoration of the frontline.

At 13:00 the enemy once again attacked in battalion strength and broke into the main line of defense. Major Dennhardt again launched a counterthrust with an Alarm-Kompanie (consisting of rounded up stragglers) that had just been assigned to the Regiment, and just as before he threw back the enemy whilst completely recapturing the frontline.

At 16:30 on the same day the enemy attacked after one and a half hours of artillery fire. They succeeded in breaking through on both sides of Moditten after shattering the elements of the Regiment located there. Dennhardt set about attacking this enemy with an Alarm-Kompanie and managed to restore the frontline while inflicting heavy losses on the foe (specifically about 200 enemy dead).

On the next day, 10.04.1945, the enemy attacked Stp. Holstein at 03:00 and managed to break in. Major Dennhardt in turn struck at them from the north out of Forsthaus Moditten with 2 Sturmgeschützen and 28 men. He threw the enemy back, prevented the rolling up of our frontline to the south and eliminated a dangerous flank threat to the Division.

Later that morning, in the neighbouring sector, the enemy captured Fort Holstein and the positions on either side of it. They then began advancing along a broad front towards the west/northwest and into the forested area of the Caporner heath. In response the Division used parts of the Regiment to create a blocking line running from east to west. At 18:30 Major Dennhardt launched a counterthrust on his own initiative towards the south with 40 men against a strong enemy force that had infiltrated into the wood and penetrated through the Divisions blocking front as it did so. Attacking with great cries of Hurra and extraordinary spirit, Dennhardts troop not only drove the enemy back towards the south but also managed to push the Divisions blocking position in this sector forwards by about 300 metres in the same direction. In the process they captured 16 MGs and 7 mortars, and about 50 enemy dead were later counted in the forest. But more importantly, this counterthrust eliminated the dangerous possibility of the Divisions left flank being cut off. The success of this attack, again under the personal leadership of the regimental commander, was all the more commendable considering that it started out under the heaviest of enemy fire from Katyushas, mortars and artillery.

Over the course of these three days Major Dennhardt largely held the sector of his Regiment. He managed to do this despite both his continued affliction from a sickness hed acquired in the Divisions previous position as well as the incoherent nature of the unit he commanded (he was largely unfamiliar with the Bataillon and Kompanie commanders). Here, from this position, he prevented the enemy from launching a dangerous thrust into the forested area west of Königsberg. 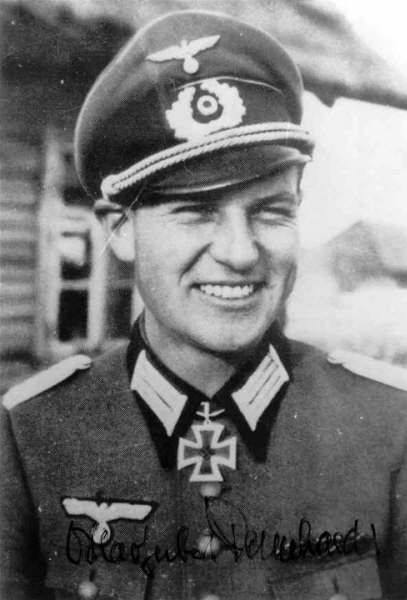 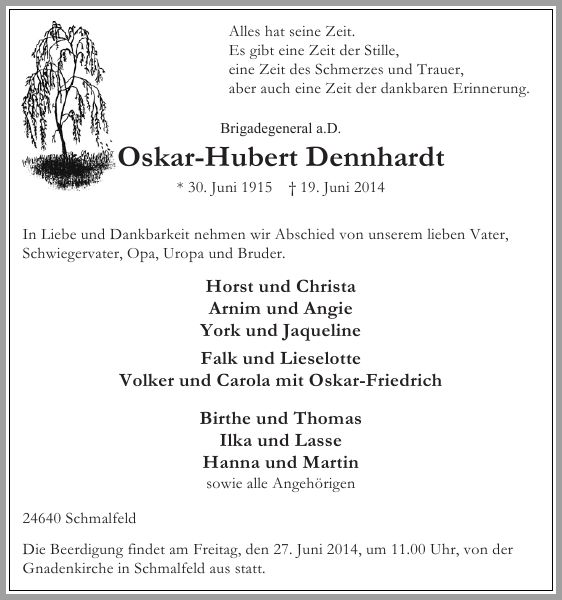