On the 01-02.07.1941 the 18. Panzer-Division achieved a great success near Borissow which was of great importance for the continuation of the German operations in the area, made possible only by Nehrings well honed skill as a commander. Here the Soviets attempted to prevent the Division from crossing over the Beresina river by committing their elite troops taken from Moscow as well as large tank forces. Their efforts were however in vain, as the Division was able to force the crossing, capture the bridge undamaged and create a bridgehead despite the incessant Soviet counterattacks. Through the attaining of this objective, Nehring and his division facilitated the swift advance of Panzergruppe 2s left wing. Nehring would be decorated with the Knights Cross for this action.

On 24.12.1943 the Soviets broke through the front of the XXXXII. Armee-Korps at Kasatin (near Kiev). Nehring was brought to the area by airplane with the mission of stabilizing the front using whatever forces were present in the area. With these, which included badly battered divisions from his own Korps, he managed to bring the Soviet advance south of Kasatin to a halt.

Awarded for his leadership of his so called wandering pocket during the Soviet winter offensive of January 1945. It was one of the handful of large units that survived the initial Soviet assault, and after a difficult fighting retreat it managed to finally break through the Soviet encirclement ring on the 22.01.1945 south of Lask, immediately being redeployed in the German defense afterwards. 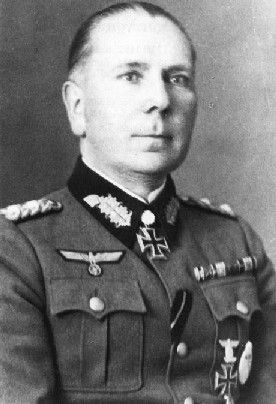