Kurt Daluege was born September 1897 in Kreuzberg to a Prussian statesman. In 1916 he joined the German Army with the rank of Lieutenant. In the course of World War One he was wounded several times and was honorably discharged in 1918 as Vizefeldwebel and Offiziersanwärter (Cadet).

Between 1918 and 1921 he participated in struggles between German and Polish militias as Führer of the "Selbstschutzes Oberschlesien" (Selfdefence Upper Silezia) and worked in Berlin as a factory hand. In 1921, while studying Construction Engineering at the University of Berlin until 1924, he became activily engaged in the Freikorps Rossbach.

In 1922 he registered as a member of the NSDAP (National Socialist German Workers Party) and was involved in the Hitler Putsch of November 9th, 1923 as liaison man in Berlin. After the NSDAP was banned, he was involved in keeping together the Partycadre in Berlin and in 1924 he established the "Frontbann" - an element within the SA  remaining its Führer until 1926.

In 1930, at Hitlers request he left the SA and became a member of the SS (SS Nr.: 1.119). As SS-Oberführer Ost he was in charge of the SS Abschnitt III Ost in Berlin. In this capacity he dealt violently with the SA in the so-called Stennes Revolt of 1933, earning Hitlers permanent protection.

Kurt Daluege also went into politics and became a delegate for the NSDAP in the Prussian Parliament. 1933 he was elected to the Reichstag as delegate for the district Berlin-Ost. Formally he was to remain in this post until 1945. After the take over of power by Hitler, Daluege was named Kommissar z.b.V.(Commissioner for special duties) and Leiter Sonderabteilung Daluege (head of special department) in the Prussian Department of the Interior. In this capacity he cleansed the Prussian police force of so-called Socialdemocratic elements and brought it into line with the Nationaalsocialistic state of mind. To this end he was named Ministerialdirektor and Leiter der Polizeiabteiluing(Chief of Police) in May 1933. As of July 1934, following the Röhm Putsch, Daluege was assigned by Göring to effectively reorganize and cleanse the SA Berlin-Brandenburg, Pommerania, Grenzmark, Silezia and Mitte. August 1934 Himmler rewarded him by promoting him to SS-Obergruppenführer. From July 1934 to June 1936 onwards, Daluege acted as Chief of Police in the Prussian Department of the Interior. Notwithstanding a first heart attack in 1936 he became Himmlers deputy as Chief of the German Police and Chef der Deutschen Ordnungspolizei in 1936, which made him the highest ranking police officer in the German Reich.

During the war, due to his realtionship with Hitler, Daluege was responsible for the protection of Hitler and other high ranking Party officials.

After Heydrichs death, Daluege acted as Governor for the Protectorates of Bohemia and Moldavia from 1942 to 1943 from which post he was dismissed after a massive heart attack. In this capacity he was responsible for the reprisals in Lidice following the death of Heydrich and for the oppression and persecution of resistance fighters.

May 1945 he was arrested in Lübeck by British Military Police and imprisonned in Nuremberg. 1946, Daluege was extradicted to Tsjechoslovakia where he was charged with and convicted for warcrimes, including the mass killings in Lidice. October 24th, 1946 he was hanged in Pankrác prison in Prague.

based on a recommendation dated 03.07.1942 and signed by Reichsführer-ϞϞ Himmler

ϞϞ-Oberst-Gruppenführer D a l u e g e has demonstrated the greatest efforts in the reorganization of the entire Ordnungspolizei, especially the establishment, after commencement of the war, of ϞϞ-Polizei-Regiments plus a Landund Stadtwacht [Rural and Municipal Constabulary]. The resulting units have shown great promise in combating bandits and saboteurs at the front as well as in homeland areas. Special merit for ϞϞ-Oberst-Gruppenführer D a l u e g e has been achieved through the taut organization of the police based air defense units, especially the Luftschutz-Polizei [Air Defense Police].
As a result of these efforts I consider him worthy of decoration with the Ritterkreuz des Kriegsverdienstkreuzes and request this award for him. 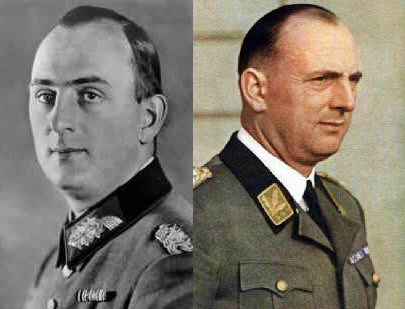