One of the most prominent Romanian World War II generals, Leonard Mociulschi was the descendant of a noble family who in settled Moldavia in the early 1800s. He attended high school in Suceava.

After graduating from the Infantry Officers School in Bucharest he joined the army as second lieutenant, in 1912. Soon he attracted attention by his valor during the Second Balkan War. Promoted to first lieutenant by brevet August 1st, 1915, he was assigned to the 29th Infantry Regiment and participated in the World War I. He was awarded the "Croix de Guerre" by the French Government for his proven bravery on the battlefields against the armies of the Austro-Hungarian Empire. His aspiration to join the new special operations forces became a reality after the war.
Commissioned deputy commander of the 6th Mountain Infantry Battalion in 1921, he had the opportunity to develop a high military training. He rose through the ranks of the army being promoted to colonel (commanding officer) of the 5th Mountain Infantry Group in 1937. In this capacity, he demonstrated a special ability in the training of the elite troops. Between the end of World War I and the beginning of the Second World War, Leonard Mociulschi commanded at every level from company through brigade, culminating as deputy commander of the 1st Mountain Mixed Brigade in 1940.


In 1941, the Kingdom of Romania joined the Tripartite Pact to liberate the Romanian provinces annexed by the U.S.S.R. as a consequence of the Ribbentrop - Molotov pact. On the Eastern Front the Romanian troops overcame the fortified Stalin Line. Colonel Leonard Mociulschi successfully led the military operations on the Nistru River facing superior enemy forces. He was decorated for this action with the highest national award, the "Order of Michael the Brave'", 3rd class.

In 1941 also begun the assault commanded by General von Manstein in the Crimea. Meanwhile Leonard Mociulschi was commissioned deputy commander of the Romanian 4th Mountain Division. This large military unit played a principal role in the siege and fall of Sevastopol. In 1942, Leonard Mociulschi was elevated to the rank of brigadier general and awarded the German "Kriegsorden des Deutschen Kreuzes in Gold" for his bravery on the battlefield. After the failure of the Romanian 3rd Mountain Division in the Caucasus, Brigadeer Leonard Mociulschi was commissioned its commanding officer in 1943, replacing Major general Radu Falfanescu in the chain of command. Early 1944, the 4th Ukrainian Front had begun the Crimean strategic offensive operation and so the Romanian 3rd Mountain Division was forced to relocate around Sevastopol. In this area, the mountain troops of the generals Ioan Dumitrache (2nd Division) and Leonard Mociulschi (3rd Division) were engaged in a bloody battle. These units fought in cooperation despite the intense attacks of hundred of tanks and the Soviet bombers.

The evacuation known as "Action 60.000" was carried out by the Romanian Royal Navy. It was one of the biggest naval rescue operations on the Black Sea. On May 10th, 1944, Brigadeer Leonard Mociulschi embarked on N.M.S. Queen Mary. When the destroyer had finally reached its destination, Leonard Mociulschi was already a major general. He was promoted to the higher rank while the warship was still following the dangerous waterway to Constanta Harbor.


Romanians wounded and killed in action during the campaign on the Eastern Front totaled 315.207. In a brief proclamation to the Romanian people broadcast from Bucharest on August 23rd, 1944, King Michael I of Romania announced the cease fire against the Allies. At that time Major general Leonard Mociulschi was in charge of the "Crisuri" Group as well as the 3rd Mountain Division, in Transsylvania. In the coming operations he delayed the Axis offensive while the Romanian-Soviet reinforcements were deploying in the area. The 3rd Mountain Division then assumed a key task in the next confrontation for the liberation of the Romanian city of Oradea, participating in one of the greatest tank battles in Eastern Europe.

On the Romanian Western Front, the 3rd Mountain Division had been engaged in the battle for Debrecen, Hungary, then it crossed the forests of Lucenec, Slovakia, continuously forcing the Axis troops to retreat. In February 1945, after a dynamic fight in the Javorina Mountains, the specific strategy of Major general Leonard Mociulschi pushed back the elite German mountain troops of the 8th Division. For all these successes Leonard Mociulschi was awarded the "Order of Michael the Brave" with swords, 3rd class, according to Brevet no.47/1945.


Without any prosecution, on a summer day of 1947 Leonard Mociulschi lost his freedom for 7 years and 2 months in the top-security detention centers of the new Communist government. In the 60's, as a result of a change in the political leadership of the Romanian Communist Party, after the official visit of the President of France to Bucharest, Charles de Gaulle, General Mociulschi was rehabilitated and his merits recognized. The regime consented even to publish part of his war memoirs, in 1967. There was a rumor that General de Gaulle asked about the brave man once decorated with the French Croix de Guerre.

At age 90, he died near the Carpathian Mountains he defended twice in the First and the Second World War. His body was cremated following an early wish of the general. The funeral honors were the same as those paid to a prominent senior officer of the Romanian Army. The ashes of the general were scattered over the Carpathians by the scouts of the 21st Mountain Infantry Battalion.

Received for his part in the role of the "Diviziei 4 Vanatori de Munte" in the fightings round Sevastopol.

At the time the decoration was awarded he already was commanding the "Diviziei 3 Vanatori de Munte". 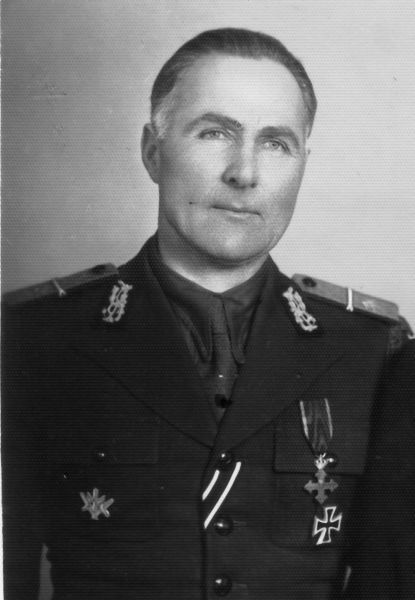