John Howard was born December 8th, 1912 in West End, a London suburb. He was the eldest in a family of nine children. At school he excelled in sports as well as in scientific subjects. He became a member of the Scouts and enjoyed the experience that world offered him like sports and camping outside Londoon in summer. His parents couldn't afford to pay for his education so Howard decided to look for work. He found a job as an office hand with a stockbroker. During this period he did keep in touch with the Scouting movement and educated himself further by attending night classes.

During the crisis in the 30's he lost his job and left his overcrowded family to attend military school. He was posted to the King's Shropshire Light Infantry Regiment and received his basic training in Shrewsbury. Due to his love and qualifications for sports he received an offer to be trained as a physical training instructor. Howard's ambitions did not end there however. He tried to enroll in officer's training but despite his obvious capabilities his request was denied. In peacetime, it was almost impossible for a common soldier to enter officer's training. He was, however, promoted to Corporal.

October 28th, 1939, he married Joy Bromley. Around that time, his temporary military service came to an end and he joined the police force in June 1939. September 2nd, 1939, the war intervened with the plans for his future and he was drafted into the King's Shropshire Light Infantry Regiment as a Corporal. Due to the massive mobilisation, the outdated rules for promotion were revised and Howard received his promotions quickly. April 1940, he had risen to Regimental Sergeant-major. In May, the brigade commander offered him a chance to enroll in officers training. After some hesitation, he took the chance and was promoted to 2nd. Lieutenant. He left the regiment to join the Oxfordshire and Buckinghamshire (Ox & Bucks) Light Infantry Regiment and was posted to 2nd. Batallion.

Howard was promoted to Captain in 1941 and placed in command of a company. At the end of the year, news came through that the batallion was to be transformed into an airborne unit as part of the future 1st. Airlanding Brigade. Howard was thrilled with the idea and with the exiting task the unit was to perform, even if it meant degradation to Lieutenant. A few weeks later, Howard was given command of D Company and regained his Captain's rank. May 1942 saw him promoted to Major.

During the plannnig stages for D-day, Major-general Gale had decided to deploy an airborne unit to gain an important objective: the capture of the bridges at Bénouville and Ranville. He approached Brigadeer Hugh Kindersley to ask him which company best to deploy for this and Kindersley nominated Howard's D Company. After having observed D Company during a training exercise, Major Howard was told in April 1944 that his unit had been chosen as the spearhead of the British effort during the invasion. Consequently, the unit was expanded from four to six platoons. In May, Operation Mush - a mock invasion- was launched which did not go well for Howard and his men but proved to be a usefull experience in learning the techniques required for succesfully capturing a bridge.

June 5th, 1944, at 22:56 hours, Major Howard took off from Tarrant Rushton airbase in 6 Horsa glider aircraft. Each glider was towed by a Halifax bomber and contained 28 heavily armed men of D Company, 2 Ox & Bucks. Their objective was the capture of two bridges to form a natural barrier, the River Orne, which was to protect the eastern flank of the Allied invasion against a possible German counterattack. Their designated landing site was a rough plot of terrain between a pond and the Caen Canal, near the bridge. On reaching their landingsite, they barely cleared the tops of a group of poplar trees on the edge of the field and came thunderingly and joltingly to a halt, some 500 yards from their target and exactly on the predesignated time: 00:16 hours. Still shaken from their rough landing, the troops, led by Major Howard, rushed to the bridge and secured it. Further to the east, the bridge on river Orne was also taken, although one glider in the assault wave had lost its way.
A German counterattack was not launched until 02:10 hours after it had dawned on the enemy headquarters that the bridges had been taken. Until then, the glider troops had already been strengthened by paras who had come down later and together they managed to hold the bridge against an attack, heavily supported by artilley fire, by units of the German 21st Panzer Divison.
Major Howard remained in command of D Company in the defence of the Orne bridgehead and later in the pursuit of the Germans to the river Seine. During the summer of 1944, he was wounded twice and in September he returned to England. After a well-earned furlough, Howard started refitting his company up to full battle strength and training the new recruits. Mid November he sustained severe injuries to his leg and hip in a military car accident, confining him to hospital until March 1945.

At the end of the war, Howard left the army. He had hoped to pursue a military career but the injuries sustained earlier prevented this. He went to work for the British National Savings Committe and later on for the Ministry of Food. Many times, Howard was present at the ceremonies commemorating D-day. On the 10th anniversary, Howard was awarded the French Croix de Guerre avec Palmes (War Cross with Laurels). In 1966 he was asked as an advisor to the shooting of the movie 'The Longest Day' in which the story of the "coup de main" played an important part. John Howard retired in 1974 and settled down in the village of Burcot near Oxford. He died May 5th 1999 at the age of 86.

Citation:
"Major Howard was in comd of the airborne force which landed by glider and secured the bridges over the River Orne and Caen Canal near Benouville by Coup de main on 6-6-44. Throughout the planning and execution of the operation Major Howard displayed the greatest leadership, judgment, courage and coolness. His personal example and the enthusiasm which he put behind his task carried all his subordinates with him, and the operation proved a complete success." 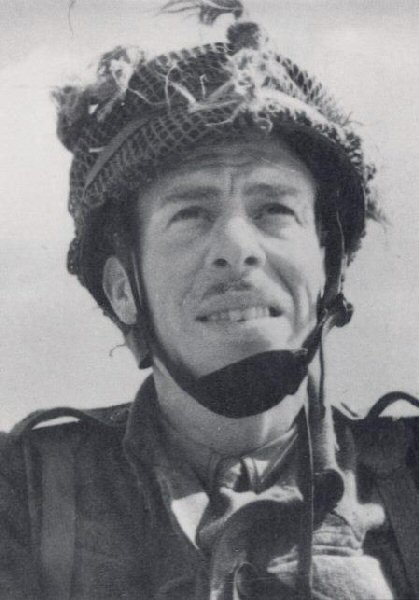