Awarded for his actions in the Kirischi bridgehead during May 1942. Here Klawe was able to decisively restore a critical situation by his independent actions despite being wounded for the fourth time in the war.

Major Klawe and his Grenadiers fought at the hotspots of the fighting during the defensive battle south of Lake Ladoga in the previous winter. During this time the commander and his men mastered numerous critical situations. The Soviets attacked the southern bank of Lake Ladoga and across the frozen Newa river. They tried to cut off and destroy the German troops fighting in this area, however their initial attempts failed. They thus redirected their main effort against a commanding hill. After several of their frontal attacks failed they finally achieved a penetration in the sector to the left of Klawes Bataillon on the 31.01.1943. The bulk of their troops then turned east in order to roll up the German main battle line.

Major Klawe recognized this danger and decided to pull out one of his Kompanien from the frontline, even though his own sector was also being attacked by strong enemy forces. He then took position at the head of this unit and thrusted into the flank of the Bolshevik penetration, which was pushed back in a fierce battle fought partially in close combat. Then, over the next 24 hours, he fended off 3 more strong enemy attacks until being finally relieved by reinforcements.

This action took place around Siniavino. Another source states that he conducted a similar action on the 02.02.1943. 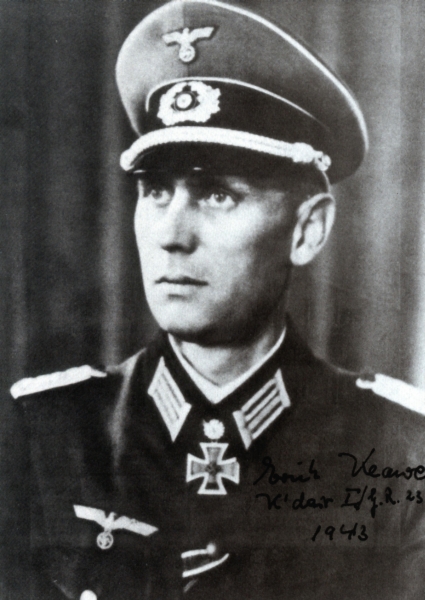