During the great defensive battle in the time period 26.02.-18.03.1943 the 32. Infanterie-Division defended the area between Borossino and Lowat, with its frontline facing southwards. In this time Major Eggemann and his Bataillon (which was involved in all the major combat from the start and had by now become badly depleted) were deployed to a thick, coverless swampy area east of Koslowo. Following endless artillery fire of all kinds the enemy struck against the front of this Bataillon on the 15.03.1943 with the support of tanks.

On the morning of that day an enemy tank-supported penetration on the left wing of the Bataillon threatened to turn into a breakthrough. A Kompanie which had been temporarily attached to the Bataillon was supposed to withdraw to the positions of the heavy Pak in an orderly fashion. However it was instead threatening to fall into confusion, and had lost contact with its neighbours. The enemy sent in tanks and infantry through the extant frontline gap. An enemy breakthrough seemed inevitable. Such a move would seriously compromise the Regiment, which had by now used up its last reserves. It would probably also make it impossible for the Division to carry out its planned withdrawal to the Redja river during the following night.

In this situation Major Eggemann chose the reckless and yet only feasible option given the circumstances. Using the remnants of his staff and individual soldiers who happened to be in the vicinity, he formed the core of an offensive group. He personally dashed from squad to squad, directing the men of the left Kompanie and compelling them to hold out. He also gathered up individual squads in order to strengthen his own assault group. Now leading at the head of this group, he threw himself at the head of the enemy. He did this despite the exhausted state of his men and having personally been wounded twice in this fighting. With his machine-pistol in hand he was a model for his Grenadiers in the ensuing close combat. Along with his assault group he was able to eliminate the battalion sized enemy force that had penetrated the lines down to the last man. Two enemy tanks also ended up destroyed behind friendly lines. This restored the old combat situation, and the front could now be held until after nightfall, when the planned withdrawal was commenced.

This battlefield success was achieved with energy, boldness and fearless devotion to duty. Furthermore it was the prerequisite for the successful withdrawal of friendly lines to the Redja position. Eggemanns Bataillon enabled the Regiment to carry out its withdrawal movement without leaving behind any heavy weapons, equipment or ammunition in spite of the extreme difficulties associated with the terrain.

The following press article, dated 10.05.1944, describes why Eggemann would receive the Oakleaves

In February 1944 Oberstleutnant Eggemann and his north-German Grenadier-Regiment were engaged with Soviet forces southwest of Narva. The latter had crossed the Narva river in great numbers and thrust deep into the German rear. Oberstleutnant Eggemann immediately led members of the neighbouring regiment in an energetic counterattack that eliminated the hostile attacking spearhead. Fighting from the defensive front that was restored by this action, over the next 11 days he and his Grenadiers repulsed 39 Soviet attacks while inflicting heavy losses. At the start of February a massive new enemy assault broke into the German positions. In the midst of persistent cold weather (which brought about numerous cases of frostbite) Oberstleutnant Eggemann and his men held out for 4 days in the rear of the enemy. Despite the gradually shrinking ammunition stocks they held their ground against attacks on all sides launched by both day and night. The last Soviet attack was defeated with blank weapons, as by now the ammunition was almost totally expended.

Oberstleutnant Eggemann and his Regiment were subsequently reintegrated into the German front following this success. 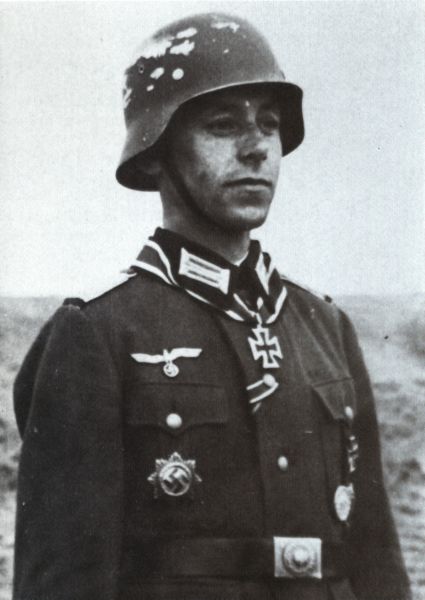