Helmuth von Pannwitz was born in Botzanowitz, Silesia, now part of Olesno. He joined the military at 16 years at the outbreak of the First World War within the Cavalry. Also during the Second World War he distinguished himself as a Cavalry officer. He was involved in setting up the Cossack volunteer forces, the XV.Kosaken-Kavallerie-Korps within the German Wehrmacht. After this he commanded the force in battle.
He was so popular that the Cossacks elected him as their Feldataman (the highest rank in the Cossack hierarchy, one that was traditionally reserved to the Tsar alone).
Pannwitz surrendered to British forces on 11th May 1945. As a result of special agreement within the Allied froces, the Cossacks were handed over to the Soviet authorities, which is often referred to as "The Betrayal of Cossacks at Lienz". Most of the Cossack military were to die, be killed, executed or comitted suicide in Soviet imprisonment. As Pannwitz was a German national, he was told by the British that he was not subject to repatriation to the Soiets. Nonetheless, Pannwitz insisted to share the fate of his men and his fellow commanders, giving himself up voluntarily to Soviet prosecution. He was executed om January 16th, 1947 at the Lefortovo prison on the charge of terrorist activities against the Soviet Union.

Awarded for his actions in the Pripet Marshes during the first month of Operation Barbarossa. On the 04.07.1941 his Vorausabteilung managed to secure the town of Pinsk and its surroundings. On the 08.07.1941 Pannwitz launched a thrust into the area Dawidgrodek-Turow (near Olszany), where he took up the fight against strong Soviet forces.

In the battles around Olszay, Oberstleutnant Pannwitz launched a lightning attack that managed to rescue some hard pressed German troops east of the Olszany canal. In the process he also managed to lay the groundwork for the next attack of the Division that resulted in the capture of the territory between Mostwa/Stwiga on one side and Pripet on the other.

Awarded for the successes of Kampfgruppe Pannwitz (consisting of Panzer-Abteilung Sauvant, a Romanian cavalry brigade, a battery from the Romanian 47th heavy artillery battalion (mot), various German alarm units as well as Cossacks and Flak) during November 1942. NE of Kotelnikowo, near Scharnutowskij, his Kampfgruppe annihilated the Soviet 61st Cavalry Division, and thereafter the 81st Cavalry Division near Kotelnikowo proper. A Soviet rifle division was also destroyed near Pimen Tscherni/Nebykow. With this the frontline in this sector was stabilized. 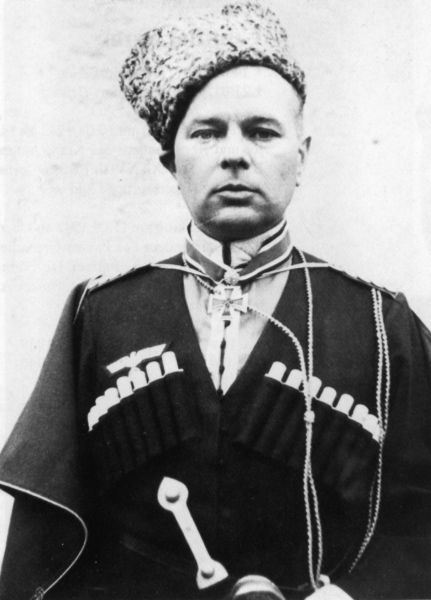