Awarded for his actions between the Dnieper and Pripet rivers. On the 16.10.1943 he and 50 Grenadiers endured heavy Soviet drumfire followed by attacks by a much larger opposing force. Despite these unfavourable odds Eisele and his men held their ground for 12 hours (a period that included close-quarters combat) and only pulled back when a rearward defensive had been completed.
2438th Award

Major Eisele has distinguished himself in numerous battles through his outstanding bravery and the skillful leadership of his Bataillon, particularly in July 1944 near Pinsk and north of Brest-Litovsk as well as at the end of August / start of September 1944 along the Bug river. In the fighting between the Bug and Narew rivers (the 7. Infanterie-Division received special praise in the Wehrmachtbericht supplement of the 27.08.1944) Eiseles Bataillon once again was very successful. On the 25.08.1944 the Bug position at the riverbed near Wywloka was held despite the enormous Soviet superiority. Enemy bridgeheads were eliminated via counterthrusts in which Major Eisele was heavily involved. On the 04.09.1944 the Soviets thrusted into the rear of the Grenadier-Regiment 61 with strong infantry forces and 114 tanks. With only 15 men and 2 MGs Major Eisele prevented a deep penetration by the Soviets by sealing the penetration off at a decisive point. In the process he was wounded for the fifth time.
695th Award 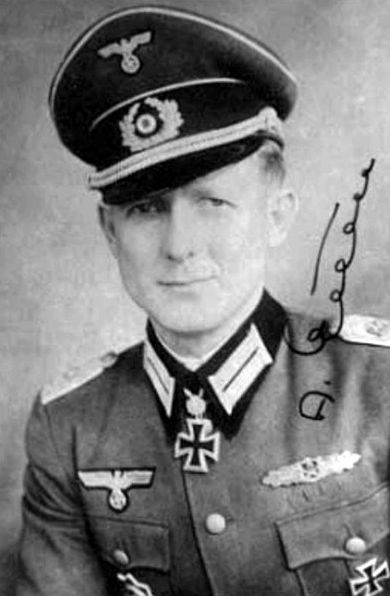