He attended Ebensburg-Cambria High School eventually dropping out and joining the United States Army on 9 September 1942.
He enlisted from Altoona, Pennsylvania (ASN: 33252550).
He joined Company A, 1st Battalion, 506th Parachute Infantry Regiment, 101st Airborne Division and was sent over seas to Europe.
He was killed in action on 12 or 18 April 1945 near Himmelgeist in Germany and was buried in the Netherlands American Cemetery and Memorial.
He was 23 years old. 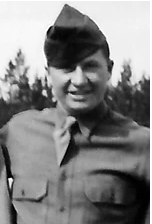