Full name: Ludolf-Hermann Emmanuel Georg Kurt Werner von Alvensleben-Schochwitz.
He was an SS functionary of Nazi Germany. He held positions of SS and Police Leader in occupied Poland and the Soviet Union, and was indicted for war crimes including the killing of at least 4,247 Poles by units under his command.
Alvensleben was born in Halle in the Prussian Province of Saxony into the noble family von Alvensleben. His father was Prussian Major General Ludolf von Alvensleben (18441912). Ludolf's father had already retired from active service to administer the family's manor around Schochwitz castle, which had been inherited from Alvensleben's grandfather, the Prussian general Hermann von Alvensleben (18091887).
Alvensleben enlisted in the Prussian cadet corps in 1911, and in 1918 joined the 10th (Magdeburg) Hussars Regiment, but did not fight in World War I. He was briefly a member in a paramilitary Freikorps unit in 1920. Between 1923 and July 1929, he was a member of the nationalist Der Stahlhelm organization. Upon the death of his father in December 1912, he inherited the family's manor at Schochwitz. He wed Melitta von Guaita on 3 May 1924; the marriage produced four children. He also later fathered a natural son raised as a Lebensborn child.
Alvensleben joined the NSDAP and SA in 1929. He soon became head of the local branch in Eisleben and chief district official in Mansfeld Land. From July 1931, he chaired the motorized corps of the SA in the Gau of Halle-Merseburg. Alvensleben left the SA in 1932; at that time he was heavily indebted and had a considerable criminal record on charges which included libel and road traffic offence.
After the Machtergreifung, he and Gauleiter Rudolf Jordan on 12 February 1933, organized a violent attack of SA and SS paramilitaries on Communist officials in Eisleben, whereby three men were killed and many others injured, an event later known as Eisleben Bloody Sunday. In March 1933 Alvensleben became a member of the provincial diet and of the Prussian Landtag, from 12 November 1933, he also was a member of the Reichstag.
On 5 April 1934, he joined the SS and became commander of the 46th Regiment in Dresden in the rank of Obersturmbannführer. On 22 August 1934 Alvensleben received a reprimand by Reichsführer-SS Heinrich Himmler in order for having insulted a woman in Leipzig in April. From 1 October 1935, he assumed the leadership of the 26th SS-Regiment in his hometown Halle. His advancement continued, when he became commander of SS-District X in Stuttgart on 20 September 1936, and commander of SS-District XXXIII in Schwerin on 1 July 1937.
Alvensleben's career continued after the 1939 Invasion of Poland as commander of the Volksdeutscher Selbstschutz ("German Self-Defense") organization in what was to become the newly established Reichsgau Danzig-West Prussia. The Selbstschutz paramilitary forces, formed by members of the German minority in Poland and led by SS officials, performed mass executions during the Intelligenzaktion Pommern in the "Fordon Valley of Death", the Massacres in Piaśnica, and other atrocities. In a letter to Himmler, Alvensleben complained about scrupulous Wehrmacht officers too weak to take drastic measures. In 1939 he confiscated the Jewish-owned manors of Rucewo and Rucewko in Reichsgau Wartheland.
In December 1939, Alvensleben was appointed member-of-staff at the command of Friedrich-Wilhelm Krüger, the SS and Police Leader in Kraków, General Government. On 23 May 1940, he was promoted to the rank of Hauptsturmführer in the Waffen-SS. From February 1941 he was in service of the Reich Main Security Office, assumed the SS and Police Leader command in Chernigov on 22 October 1941 and of Simferopol in Crimea on 19 November. In 1942, Alvensleben was SS inspector of the Durchgangsstrasse IV, a large forced labor project to built a road from Lemberg to Stalino (now Donetsk). From 6 October 1943, he held this position in Nikolaev in the rank of Major General, officially assigned to Army Group A; his tenure was accompanied by irregularities and further mass executions.
On 19 February 1944, he succeeded Udo von Woyrsch as Higher SS and Police Leader in Dresden. He took the occasion to take action against his creditors, such as Carl Wentzel who was denounced after the 20 July Plot, arrested and executed, whereafter Alvensleben was able to release his heavily indebted manor in Schochwitz. In the late days of the war, he left Dresden and fled to the West.
n April 1945, Alvensleben was apprehended by the British forces. At the end of 1945, he made an escape from the internment camp at Neuengamme in Hamburg. After a short stay in Schochwitz, he fled with his family to Argentina in early 1946. Although there is no precise data on when they arrived in the country, a 2000 documentary film records that on 27 November 1952, the government of Juan Domingo Perón granted Alvensleben citizenship under the name of Carlos Lücke. He lived until July 1956 in Buenos Aires and then moved to Santa Rosa de Calamuchita. From November 1952, he served as inspector of fish farming.
In January 1964, the district court of Munich issued an arrest warrant for Alvensleben for the killing of at least 4,247 people in Poland by units of the Selbstschutz under Alvensleben's command in the autumn of 1939. Attempts by the prosecution had no consequences for Alvensleben and he died in 1970 in Argentina, without having been brought to trial.
. 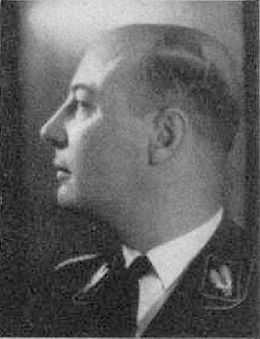 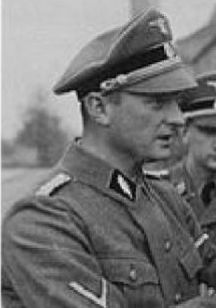 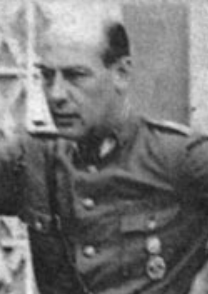