Before the war George Gilroy had been a shepherd, and was known in the RAF as Sheep. Gilroy joined the Auxiliary Air Force before the
war, and was commissioned in No. 603 Squadron in November 1938.
He was first in action on 28th October 1939 when he shared a He111 with five other pilots. By the end of July 1940 he had assisted in bringing down five German bomber s of various types.
On September 1st, he baled out of a burning aircraft and was nearly lynched by the local Home Guard before he was taken to hospital, slightly injured. On July 19th 1941 he was posted to command 609 Squadron. In November 1942 he was posted to 325 Wing in East Africa, but the following month was posted to lead 324 Wing in North Africa on the Tunisian front. He rapidly gained several victories. He continued to ead the Wing during the invasions in Sicily and southern Italy, remaining until November 1943, by which time his tour ended and his total score was 21 at least, and had been wounded three times. He was promoted to Group Captain and returned to the United Kingdom, becoming commanding officer of Wittering, and later, Blakelow. He left the RAF at the end of the war and rejoined the Royal Auxiliary Air Force, returning to 603 Squadron as Commanding Officer and also returned to sheep farming in Scotland.

Citation:
"Since this officer was awarded the Distinguished Flying Cross in July, 1940, he has destroyed an additional 7 enemy aircraft and damaged a further 2, making a total of 10 destroyed and 4 damaged. Under his command his squadron has met with considerable success in the destruction of enemy aircraft. He is a first class fighter pilot and an excellent leader."
Second DFC awarded as a bar to be worn on the ribbon of the first DFC. 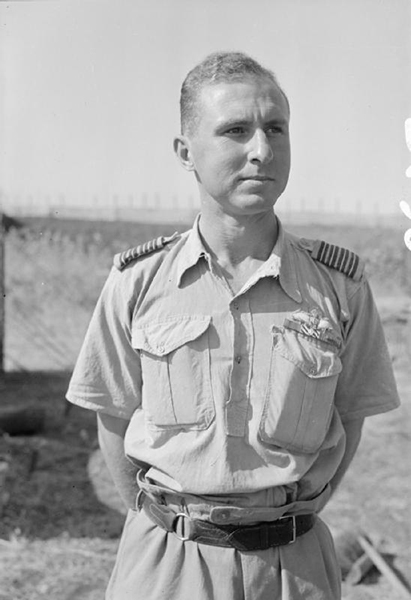