Albert Eduard (Ed) Stoové was third out of eight children of Jozeph Leophinus Gaillard Stoové and Louise Caroline Françoise Manz. His father owned the dairyfarm Louise in Djetis and was owner of racehorses and their jockies.
In January 1939, Ed was drafted into military service. After primary training, Ed was placed in the Royal Navy. Since he had little stomach for being a sailor, he requested to be transferred to the department of aviation of the KNIL (Royal Dutch East-Indies Army). Shortly after, he received pilots training at Kalidjati in Bandoeng on Java. He was trainend on the Koolhoven FK-51 and received his wings in December 1939. Initilally he was stationed on the Glenn Martin 139 bomber as a pilot but he soon switched to fighter aircraft. On July 1st, 1941, he ended up with 2-VLG-V (2nd Department, Airgroup Five), flying the Brewster Buffalo B-3117.
December 9th, 1941 he and his group left for Singapore to be stationed on Kallang Airfield, Singapore, along with 27 Glenn Martin bombers and 12 Buffalo fighters.
During the battle for Singapore, his airgroup managed to sink a Japanese destroyer and shoot down four Japanese aircraft. January 18th, 1942, the unit returned to Java and Stoové flew on to Semplak with seven other Brewsters. Janaury 23rd , he took part in an attack by 1-VLG-V and 2-VLG-V on Japanese shipping in the Strait of Makassar. In this attack, the fighers could carry two 25 lbs bombs each, eight hits were scored on four ships. March 1st , with Captain van Helsdingen and with five aircraft of 1-VLG-2 and two of 2-VLG-5, he took part in two attacks on Japanese landings at Eretan Weitan. Van Helsdingen led the attack with Stoové as his wingman.
On March 8th, following the capitulation, Stoové was made a POW and was interned in various Japanese POW camps, among others on Flores to perform forced labor on Japanese airfields.
After having been liberated from a Japanese camp, Stoové was honorably discharged and went to work with a car dealer in the Dutch East-Indies. After the transfer of sovereignity to Indonesia in 1949, he emigrated to the Netherlands with his wife Janet Edith van Handenhove. They left May 4th, 1954 aboard the motor vessel Willem Ruys for Rotterdam. After arrival in the Netherlands, they settled down in Bloemendaal.
In the Netherlands he put in for a job with the air force and was accepted. Ed Stoové was posted to 334 Squadron at Soesterberg Air Base. For this the Stoové family moved to Delft. Stoové flew transport aircraft with 334 Squadron. He was discharged in 1975 at the age of 55 but continued working in a garage in Delft until the age of 70.
Stoové passed away on September 23rd, 2010 in the nursing home Bieslandhof in Delft.

Permission to wear the decoration was granted on October 21st, 1958. 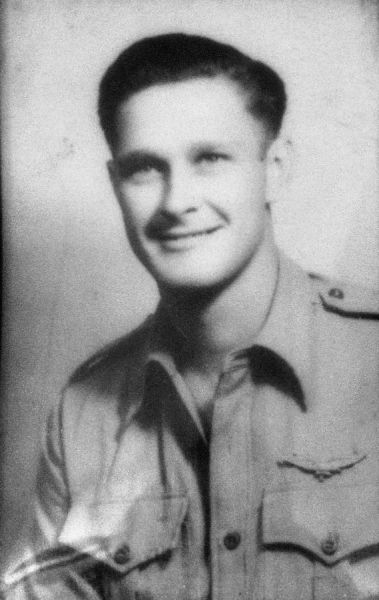