Bunny Rymills was educated at Southfields School. He started to train in Abingdon to become an architect but decided to volunteer for the Royal Air Force Volunteer Reserve in June 1939. He was posted at No. 58 Squadron but was then asked to join No. 138 Squadron by Squadron Leader Pickard over a game of cards.
His work entailed landings and take-offs by night on rough French farm fields under the noses of the enemy. Most of the times secret agents were brought to France in the aircraft they flew, either a Lysander of a Hudson, together with money for the resistance to run their affairs. Even often, passengers who's life were in danger, were transported to England.
When he left 161 Squadron in July 1943, Rymills had completed 65 operations without a break, twice the usual number.
Later he was posted as a flight commander to Number 644, a Halifax squadron dropping supplies to the Resistance and preparing to tow gliders in the Normandy invasion of June 1944.
At the end of the war Rymills stayed on in the RAF and flew operations against jungle insurgents during the Malayan Emergency.

Citation:
"This officer has completed a large number of operations, some of them of a very hazardous nature. He is a courageous and skilful pilot whose example has won the confidence of all with whom he has flown. He has displayed great determination and his successes have been worthily
earned."

Citation:
"This officer has at all times displayed the greatest keenness and enthusiasm for operational flying. Since the award of the Distinguished Flying Cross he has completed a number of sorties, all of which have been highly successful." 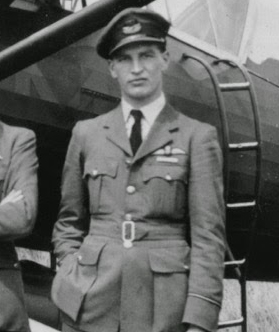