Citation:
"In Burma, on the morning of the 12th June 1944, the enemy put down an intense artillery barrage lasting an hour on our positions north of the village of Ningthoukhong. This heavy artillery fire knocked out several bunkers and caused heavy casualties, and was immediately followed by a very strong enemy attack supported by five medium tanks.
After fierce hand-to-hand fighting, the perimeter was driven in in one place and enemy infantry, supported by three medium tanks, broke through, pinning our troops to the ground with intense fire. "B" Company, 7th Gurkha Rifles, was ordered to counter-attack and restore the situation.
Shortly after passing the starting line it came under heavy enemy medium machine-gun and tank machine-gun fire at point blank range, which covered all lines of approach. Rifleman Ganju Lama, the No. 1 of the PIAT gun, on his own initiative, with great coolness and complete disregard for his own safety, crawled forward and engaged the tanks single-handed.
In spite of a broken left wrist and two other wounds, one in his right hand and one in his leg, caused by withering cross-fire concentrated upon him, Rifleman Ganju Lama succeeded in bringing his gun into action within thirty yards of the enemy tanks and knocked out first one and then another, the third tank being destroyed by an anti-tank gun.
In spite of his serious wounds, he then moved forward and engaged with grenades the tank crews, who now attempted to escape. Not until he had killed or wounded them all, thus enabling his company to push forward, did he allow himself to be taken back to the Regimental Aid Post to have his wounds dressed.
Throughout this action Rifleman Ganju Lama, although very seriously wounded, showed a complete disregard for his own personal safety, outstanding devotion to duty and a determination to destroy the enemy which was an example and an inspiration to all ranks. It was solely due to his prompt action and brave conduct that a most critical situation was averted, all positions regained and very heavy casualties inflicted on the enemy."

Later promoted to the rank of Hon. Captain.

Citation (general):
"In recognition of gallant and distinguished services in Burma." 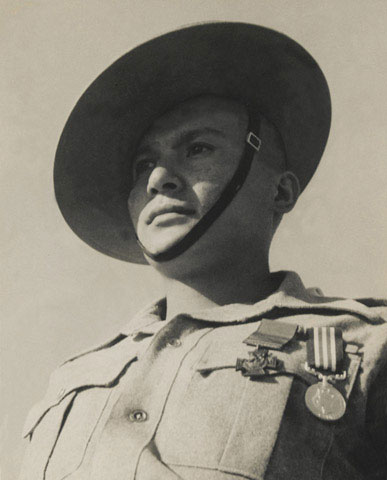