Friedrich-Erdmann von Hanke was for refusing to act as ordered, centenced to death by the Military Court of the 359. Infanterie-Division. The sentence was rejected by higher authorities.

According to his "Beurteilung" the awarding date was November 23rd, 1941.

On the 24.10.1943 Oberst von Hake smashed an enemy breakthrough attempt near Darmstadt (southwest of Melitopol) through his own swift, independent action. In the process 35 tanks and at least 1 infantry regiment was destroyed. The Panzer-Kompanie of Oberleutnant Graf Ledebur, which belonged to the Kampfgruppe, was mentioned in an OKW communique.

During the course of the retreat movement to the Lower Dnieper the Kampfgruppe, which was directly attached to the XXXXIV. Armee-Korps, received the following mission:

1. To halt the enemy forces advancing to the west.
2. Prevent an outflanking of the left flank of the Korps.

For the duration of the time that Oberst von Hake was subordinated to the Korps (the 23.-29.10.1943), he fulfilled his assigned tasks in a decisive way with his independent decisions and ruthless devotion to duty. He did so in particular on the 27.10.1943. The Kampfgruppe, without contact with friendly forces to the right or left, had a combat strength of only 216. This was broken down into 11 Panzers, 5 Sturmgeschütze and 2 Panzergrenadier-Kompanien with about 50 men each. These forces had to hold a sector of 9 km.

On the morning of this day the Russians launched a battalion-sized attack from Alexanderfeld against the village of Annowka. At the same time they attempted to achieve a breakthrough along the road near Kuibyschewo with 11 tanks and infantry mounted in trucks. After these were repulsed, the enemy repeated his attack from Alexanderfeld. The enemy force consisted of at least 2000 men, 1 anti-tank rifle battalion as well as numerous heavy weapons and rocket launchers. Annowka was already outflanked to the north and south when new enemy forces began a vicious thrust to the northwest in the direction of Point 53.5 via Point 39.3. This was to attack our Panzer position west of Kuibyschewo from the rear. A breakthrough seemed inevitable due to the weak strength of our own forces, in addition to the fact that the Sturmgeschütze were running low on ammunition.

Thus Oberst von Hake decided to launch a renewed counterattack with his Panzers, even though hed have to leave his left wing entirely open in doing so. This attack was an overwhelming success. Not only were the enemy attacks repulsed, but the Russians were also thrown back far beyond their starting position. A flank attack reaching far south into the sector of the neighbouring Division by Hake also laid the groundwork for this Division to pull its wing back to the ordered line during the evening.

Only the personal devotion to duty by Oberst von Hake, embodied in his bold decisions and skillful offensive leadership, meant that not only were the attacking Russian divisions thrown back, but that they also ceased any further advances in this area for 24 hours. 8 tanks, numerous anti-tank guns, 1 Katyusha and an undetermined number of anti-tank rifles plus light and heavy infantry weapons were either destroyed or rolled over. Hundreds of dead littered the battlefield. On the following day a similar act repeated itself.

The successful completion of the Korps ordered mission is fully to the credit of Oberst von Hake. Through his exemplary personal bravery, bold initiative and personal leadership he has achieved a great victory for the operations of the Korps. During the conduct of further missions Oberst von Hake was wounded by a shell splinter to the head. However he did not give up his combat leadership for even a moment. 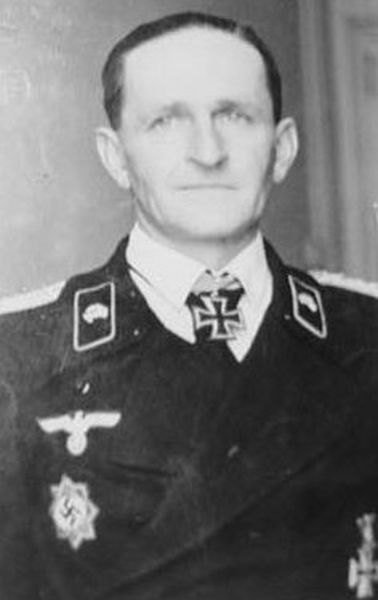