Soldier Burlachuk distinguished himself between 14 January and 17 February 1945. On 14-15 January 1945, he suppressed five enemy pillboxes on the left bank of the Vistula river to the south of Warsaw. On 15 February, he managed to destroy several enemy pillboxes at Alt Rüdnitz despite his wounds. Eventually, he participated in the defence of this village after the enemy launched ten counter-attacks on 17 February 1945. During the heavy fighting that followed, soldier Burlachuk heroically blew himself up and took some German soldiers and officers with him. 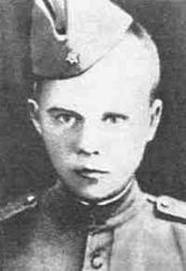