Erhard Miegel was born as son of Paul Miegel, who was employed by the Landratsamt (District office) Pabianitz (now Pabianice, Poland). About his school career it is only known that he attended a higher school, he had a scholarship. A civil servant career was planned for Erhard Miegel. It is not known to what extent he had taken that path, but he was already employed at the Landratsamt.

We know from his military career that he was a parachutist, he was on Crete, among other things. Erhard Miegel ended up in a field hospital twice, and was then redirected. But that info doesn't add much. Somewhere in the course of the winter of 1943-1944 he got the E.K. II Kl. . There is a photo of the award ceremony, the charter has been lost, so also the exact date. At a certain point in time, Erhard Miegel told home that he considered the war to be lost. What moved him to participate in the operation Greif has not been reported. Possibly his brother ( 2006) knew something, but according to his widow ( 2018), he almost never spoke about the issue. Erhard's parents knew nothing for sure.

The parents received the last sign of life with a letter dated 22.11.1944. A letter from Altneuhaus. In Altneuhaus lies the Truppenübungsplatz Grafenwöhr. There the soldiers were prepared for the Ardennes offensive. The content was purely personal. In the case of Erhard Miegel, the death certificate as it was sent to the family has been preserved. The document is reminiscent of a postcard in size and thickness. The card is provided with a RAD number (93341). The family owned copy is a negative, just like the one owned by Dietrich Wittsack's daughter. This is therefore a decisive factor. Erhard Miegel was part of the group that was caught in / near Géromont.

Erhard Miegel was the youngest of the executed members of the operation Greif, he was 19 years old. The name is incorrectly written on the cross on his grave (Migel). Getting the error fixed is not possible. 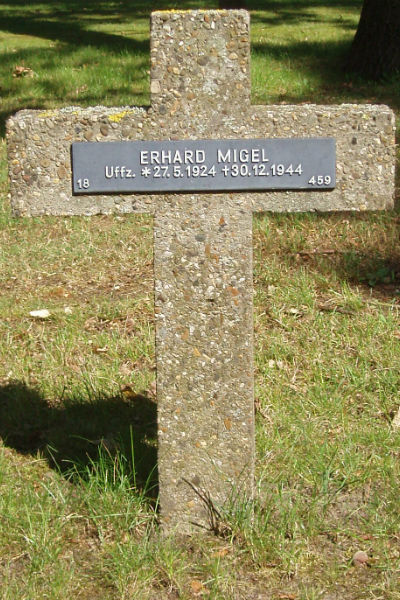