"For conspicuous gallantry and intrepidity above and beyond the call of duty in action against enemy aggressor forces at Yonggong-ni, Korea on 7 March 1951. Volunteering to lead his squad up a hill, with meager cover against murderous fire from the enemy, Sergeant First Class BRITTIN ordered his squad to give him support and, in the face of withering fire and bursting shells, he tossed a grenade at the nearest enemy position. On returning to his squad, he was knocked down and wounded by an enemy grenade. Refusing medical attention, he replenished his supply of grenades and returned, hurling grenades into hostile positions and shooting the enemy as they fled. When his weapon jammed, he leaped without hesitation into a foxhole and killed the occupants with his bayonet and the butt of his rifle. He continued to wipe out foxholes and, noting that his squad had been pinned down, he rushed to the rear of a machinegun position, threw a grenade into the nest, and ran around to its front, where he killed all three occupants with his rifle. Less than 100 yards up the hill, his squad again came under vicious fire from another camouflaged, sandbagged, machinegun nest well-flanked by supporting riflemen. Sergeant First Class BRITTIN again charged this new position in an aggressive endeavor to silence this remaining obstacle and ran direct into a burst of automatic fire which killed him instantly. In his sustained and driving action, he had killed 20 enemy soldiers and destroyed four automatic weapons. The conspicuous courage, consummate valor, and noble self-sacrifice displayed by Sergeant First Class BRITTIN enabled his inspired company to attain its objective and reflect the highest glory on himself and the heroic traditions of the military service." 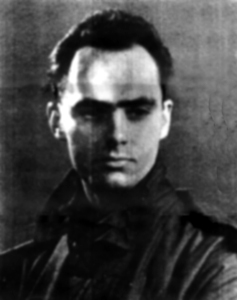