Citation:
Captain Jamieson was in command of a Company of The Royal Norfolk Regiment which established a bridgehead over the River Orne, south of Grimbosq, in Normandy.
On August 7th, 1944, the enemy made three counter-attacks which were repulsed with heavy losses. The last of these took place at 1830 hours when a German Battle Group with Tiger and Panther tanks attacked
and the brunt of the fighting fell on Captain Jamieson's Company. Continuous heavy fighting ensued for more than four hours until the enemy were driven off, after suffering severe casualties and the loss of three tanks and an armoured car accounted for by this Company. Throughout these actions, Captain Jamieson displayed outstanding courage and leadership, which had a decisive influence on the course of the battle and resulted in the defeat of these determined enemy attacks.
On the morning of August 8th the enemy attacked with a fresh Battle Group and succeeded in penetrating the defences surrounding the Company on three sides. During this attack two of the three tanks in support of the Company were destroyed and Captain Jamieson left his trench under close range fire from enemy arms of all kinds and went over to direct the fire of the remaining tank, but as he could not get into touch with the commander of the tank by the outside telephone, he climbed upon it in full view of the enemy. During this period Captain Jamieson was wounded in the right eye and left forearm but when his wounds were dressed he refused to be evacuated. By this time all the other officers had become casualties so Captain Jamieson reorganized his Company, regardless of personal safety, walking amongst his men in full view of the enemy, as there was no cover. After several hours of bitter and confused fighting, the last Germans were driven from the Company position.
The enemy counter-attacked the Company three more times during that day with infantry and tanks. Captain Jamieson continued in command, arranging for artillery support over his wireless and going out into the open on each occasion to encourage his men. By the evening the Germans had withdrawn, leaving a ring of dead and burnt out tanks round his position.
Throughout this thirty-six hours of bitter and close fighting, and despite the pain of his wounds, Captain Jamieson showed superb qualities of leadership and great personal bravery. There were times when the position appeared hopeless, but on each occasion it was restored by his coolness and determination. He personally was largely responsible for the holding of this important bridgehead over the River Orne and the repulse of seven German counter-attacks with great loss to the enemy."

Later promoted to the rank of Major.
David Auldgo Jamieson is buried at the Burnham Norton Churchyard,
Great Britain. 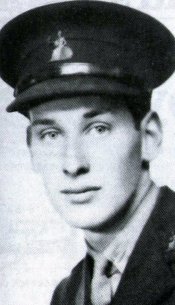