On the 17.03.1944 the 6./Grenadier-Regiment 3 was in a blocking position north of Pskov, specifically Hill 35.8 (which lay northeast of Abisha). Oberfeldwebel Kutschkau defended this sector with his troops against all Soviet penetration attempts, and by doing this he prevented the loss of the whole position held by both the Regiment and Division as a whole. For this action he would receive the Knights Cross.

In the first days of January 1945 the Grenadier-Regiment 3 was deployed in the Rominte position between Goldap and Gumbinnen. The village of Daken was the lynchpin of II. Bataillon. At this time the Soviets managed to penetrate into the southern entrance to the village, and threatened to achieve a breakthrough. Oberfeldwebel Kutschkau was sent in as a reserve along with the Regimental Pionierzug and tasked with leading the counterthrust. Despite heavy Soviet defensive fire, bolstered by the addition of reinforcements, Kutschkau was able to put his great talents to good use and retake the old German defensive positions. For this he would be awarded the Oakleaves.

Recieved for a wound inflicted on the 12th of November 1943. 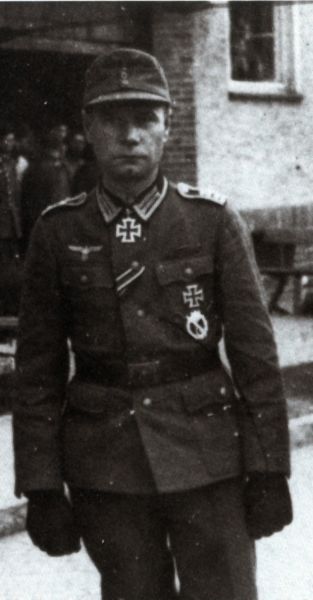