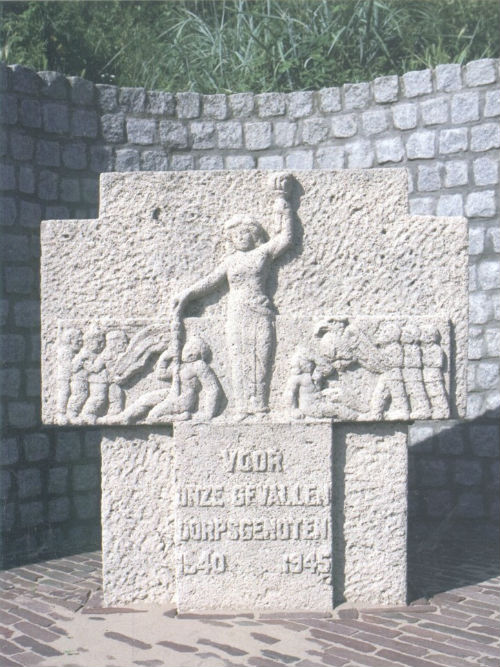 The monument was commissioned by a specially created committee that wanted a memorial to the fellow villagers who had fallen in the name of freedom. The statue was made by the sculptor W. van Kuilenburg. It is a monument made of sandstone. The monument is a kind of comic strip in stone. Right: three helmeted figures, the enemy. The number three indicates that there were many and the bird is supposed to symbolize the German eagle. The figures attack a figure lying on the ground, the Wijk aan Zeeërs. Left. Three figures that give something to a seated figure. In the center a female figure with the victory fire. The monument contains a tube containing a list with all the names of the killed Wijk aan Zeeërs. Monument is by Mayor H.J.J. Scholtens unveiled on May 10, 1949. The monument is on the corner of De Zwaanstraat - Van Ogtropweg. In 1981 the monument was restored and after arrival it was moved backwards. In 1982, bollards were placed to prevent bicycles from being placed. In 2004 the monument was moved and renovated again.