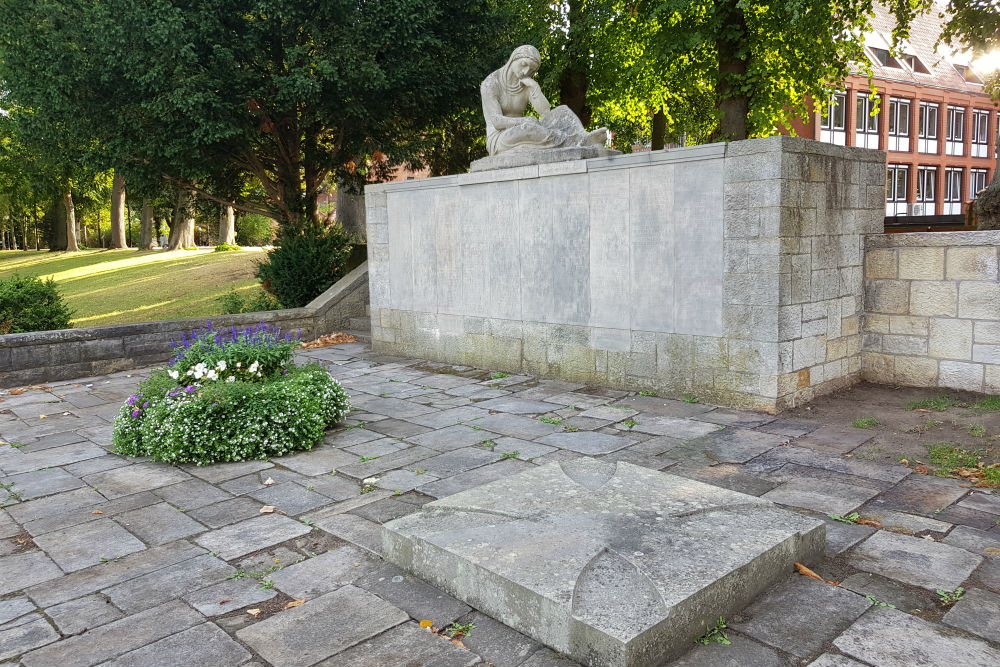 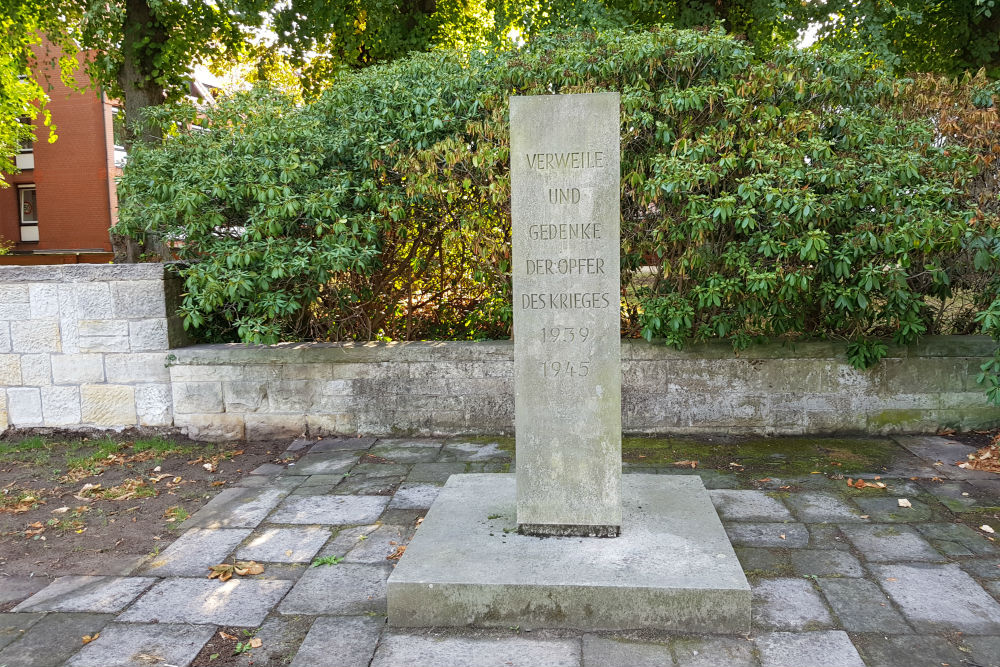 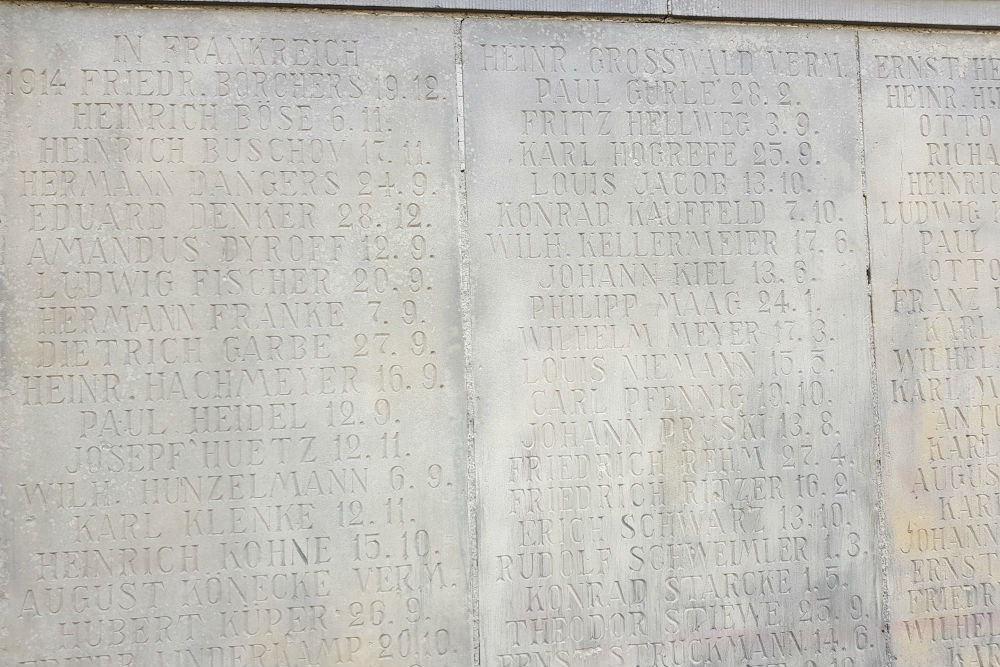 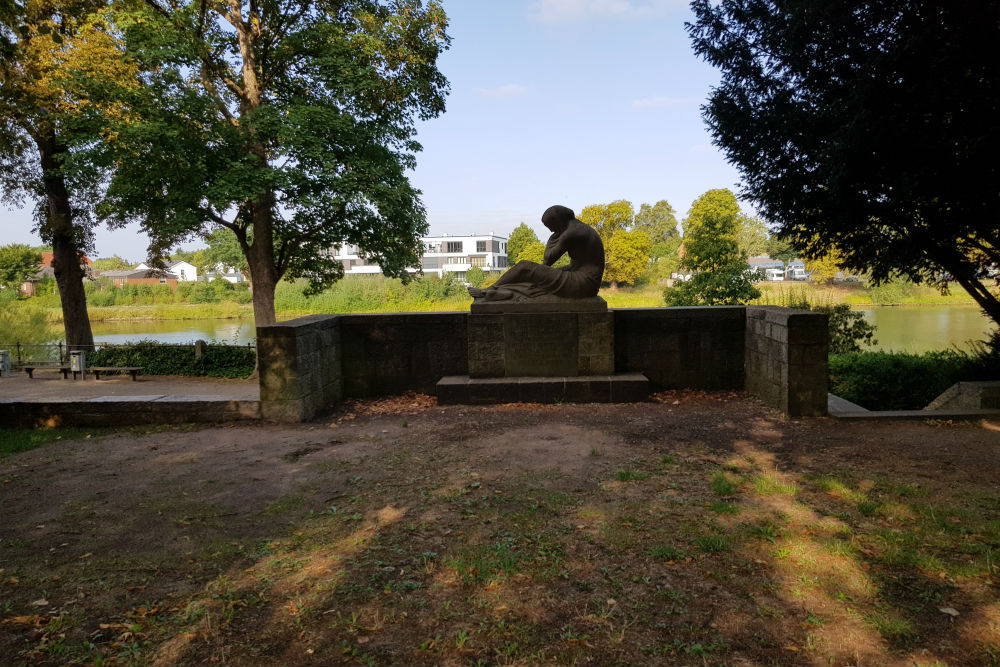 The memorial stands on a bastion that once formed part of the city defences beside the River Weser. The monument consists of a wide platform facing the river and a memorial wall. Four steps along the entire width of the platform lead up to the broad paved area. A large military cross is carved into a square stone slab resting on the surface.
A large square stone block has been added to the platform dedicated to the 'Victims of expulsion and violence' ('Den opfern der Vertreinung und Gewalt'). and a narrow stele commemorating the dead of WW2. It contains only a brief inscription and no names.

The names of the WW1 dead are inscribed on the memorial wall facing the Weser. The date of death is given for almost all individuals and they are grouped in chronological order but, unusually, also arranged depending on where they died. This gives am interesting illustration of how far and wide recruits from a small German town could be sent.
These are: France (224 names with deaths also recorded for 1919, 1920, 1922 and 1923), Russia (67 with 1 from 1920), Belgium (40), On the Jade (1), In the Carpathians (1), In Romania (2), In Galacia (10), In Italy (2), In the Dardanelles (2), In the Falklands (2), In Alsace-Lorraine (6), In the Dolomites (1), On the Sylt (1), At the Skagerrack, In Serbia (1), In Albania (1), In the Phalz (1), With U-boat 79 (1), In Hungary (3). At the end 10 individuals who died in military hospitals ('Im Lazarett') in Germany listed beneath the name of the town where they died.
A life-size female figure representing Germania reclines on top of the wall in a pose of mourning, her left hand supporting her chin.
A flight of steps on the north side of the memorial wall gives access to the Weserwall path. At this level there is only a low wall with a dedicatory inscription topped by the Germania figure.